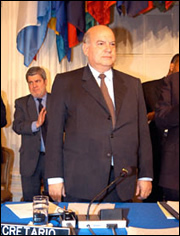 José Miguel Insulza, secretary general of the Organization of American States, will be the keynote speaker at a conference examining democratic struggles inLatin Americaon Oct. 7 and 8 (Friday and Saturday) at the University of Notre Dame.

TitledDemocratic Governance in Latin America,the conference will be held in theHesburghCenterauditorium and is sponsored by the Universitys Kellogg Institute for International Studies. Insulzas keynote address will be at4:45 p.m.Oct. 7.

Insulza brings important perspective on the growth and sustainability of democracy inLatin America. He was a political science professor inChileuntil 1973, when he went into exile after the military coup and the rise of Gen. Augusto Pinochet.Insulza returned in 1988, after which he held a number of offices in the Chilean government, most recently asChiles Minister of the Interior.

After a wave of democratization beginning in the 1980s, democracy in Latin American never has seemed more precarious, and public support for it continues to wane. InGuatemalaandBrazil, as much as two-thirds of the population rejects democracy as the most preferable form of governance. Moreover, the majority of Latin Americans are poorer now than they were in 1996.

The conference will explore how Latin American governments can maintain a high quality of democratic practice, help their countries advance economically, and combat social problems caused by poverty,said Scott Mainwaring, director of the Kellogg Institute and Conley Professor of Political Science.

Rather than focus on each area separately, the conference will look at the threeconcerns together, said Rev. Timothy R. Scully, C.S.C., professor of political science and the conference co-organizer.

Intellectually, we believe that it is imperative to analyze the interactions among them in order to draw practical lessons for decision-makers,Father Scully said.By studying this, we hope to shed light on what policies and institutions are most likely to foster success.