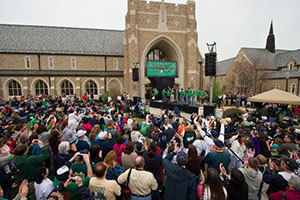 Coach Brian Kelly helps unveil the 2010 version of “The Shirt”

The University of Notre Dame’s The Shirt for 2014 will be unveiled Friday (April 11) during a celebration beginning at 4:30 p.m. at the Hammes Notre Dame Bookstore on campus.

The Shirt 2014 marks the 25th anniversary of what has become one of Notre Dame’s most visible athletic icons and ranks among the highest-selling items of collegiate apparel in the nation.

The celebration, which is open to the public, will include performances by the hip-hop dance group Project Fresh, the Notre Dame Bagpipe Band, the Notre Dame Pom Squad and the Notre Dame Glee Club as well as a guest appearance of Notre Dame’s head football coach, Brian Kelly, who will officially unveil The Shirt at 6 p.m.

Each year since 1990, when the first version of The Shirt was made available to Notre Dame students, alumni and fans, its popularity and sales have increased. In 1990, the 32,300 shirts sold generated more than $100,000 for Zhengde Wang, a Notre Dame graduate student from China who had been severely injured in an automobile accident. Since then, proceeds from the shirt sales provide funds for The Shirt Charity Fund, which supports students suffering from severe illnesses and facing high medical bills as well as such student organizations as the Hall Presidents Council and Notre Dame Habitat for Humanity.