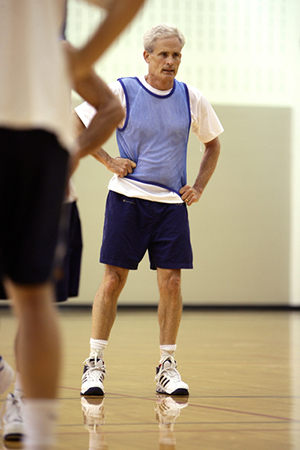 Two faculty members from the University of Notre Dame’s Play Like a Champion Today program have returned from a conference in Vatican City where they were delighted to learn that Pope Francis likes what they’re doing.

Clark Power, professor of psychology and education and founder of the program, and its director, Kristin Sheehan, were among the 80 invited participants in an international conference sponsored by the Vatican’s Pontifical Council for the Laity. The mid-May conference, “Coaches: Educating People,” brought together educators, sports scientists, theologians and coaches to discuss the professional, personal and spiritual formation of sports teachers and their responsibilities as role models for the next generation.

Power and Sheehan were there to describe the Play Like a Champion model and its emphasis on coaching as a youth ministry, and they were particularly pleased by a message Pope Francis addressed to the conference.

“Pope Francis clearly recognizes the critical role that coaches play in lives of young people,” Power said. “He is calling upon sports organizations to take responsibility for their coaches by providing them with coach education that goes beyond the X’s and the O’s. The Pope is endorsing the character education that Play Like a Champion strives to provide in student-athletics at all levels.”

In his message, Pope Francis said that sports coaches and teachers needed a “human and spiritual balance” in order “to persevere in the genuine values of sport and its fundamental nature as both game and socializing activity, impeding its perversion under the pressure of so many interests, especially economic, today increasingly invasive.” A coach, he said, “can be a good educator of young people, along with parents, teachers, priests and catechists. But every good educator must receive a solid education. Educators must be educated.”

“I am thrilled that the Pope is willing to put sports at the center of youth ministry. This seminar gives me hope for our future,” said Power.

Notre Dame’s Play Like a Champion program, a component of the University’s Institute for Educational Initiatives, assists coaches, parents and administrators nationwide to develop ethically responsible sports leaders and to promote character development through sports. It offers on-site clinics and workshops, online courses and an annual Summer Leadership Conference at Notre Dame.