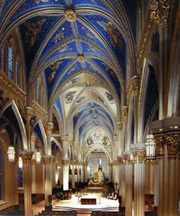 The 10 a.m. (ET) Sunday Mass in the University of Notre Dame’s Basilica of the Sacred Heart will be televised live weekly on CatholicTV beginning this Sunday (Nov. 30).

“We are pleased to partner with CatholicTV to provide the Basilica Mass each Sunday morning,”said Rev. Richard V. Warner, C.S.C., director of campus ministry.“CatholicTV has strong East coast distribution and a strategy for growing its cable audience on a nationwide scale.We are firmly committed to bringing quality Catholic liturgies to a national and global audience,”

CatholicTV, formerly Boston Catholic Television, can be found on Comcast, Verizon, Full Channel and RCN cable providers in New England.It also can be viewed nationally on Sky Angel IPTV ( www.skyangel.com ), which specializes in Christian and family-friendly television and radio programming that is available by subscription through a broadband Internet connection and small set-top box.

The Mass from Notre Dame is also streamed live and archived online at http://www.CatholicTV.com

Notre Dame’s Liturgical Choir, directed by Gail Walton, provides sacred music for the Mass during the academic year.The Basilica Community Collegium Choir, directed by Andrew McShane, provides the music for the liturgy when classes are not in session.The broadcast capturesthe choral voices as they are heard inside the Basilica, which is usually filled to capacity and remarkable for the enthusiastic liturgical participation of all in attendance.

The Mass was broadcast on the Hallmark Channel from 2002 to last June, as well as on DIRECTV in 2007.Since June, the Basilica staff has received thousands of letters and messages urging the Mass continue to be available on televison.Many viewers are housebound or otherwise unable to attend Mass at their local parish, and others report that the Basilica Mass enriches their experience oflocal parish liturgies.

Technical production of the Mass is managed by Pentavision Communications Inc., which operates the broadcast equipment from a control room in the basement of the Basilica. The
audio and video equipment required has been installed with architectural discretion and designed to capture the beauty of the liturgy without disrupting the prayerful participation of the congregation.

Information on the Basilica of the Sacred Heart, including instructions for downloadingthe Mass on the Internet, viewing liturgical readings and music texts online, and taking a virtual tour of the Basilica, is available at http://basilica.nd.edu