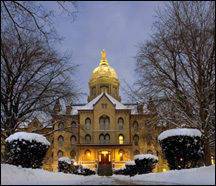 Each year at Notre Dame is filled with highlights, achievements and accomplishments. Here are some of the significant moments from 2008: