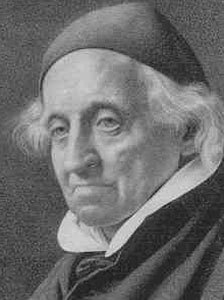 The University of Notre Dame has acquired a Bible once owned by Rev. Stephen Badin, the pioneer priest on whose mission grounds Notre Dame’s founder, Rev. Edward Sorin, C.S.C., began to build the University 172 years ago.

Father Badin’s Bible was purchased from the Sisters of Loretto of Nerinx, Kentucky, and a delegation of sisters is coming to Notre Dame on Monday (July 14) to deliver it by hand during a Mass that will be celebrated in the Log Chapel where Father Badin is buried (see photos from the event).

The first Catholic priest ordained in the United States, Father Badin served as a missionary on the Kentucky, Indiana and Illinois frontiers. In 1831, he built the Log Chapel for his mission headquarters on the site where its replica stands today, the original having burned down in 1858. The 542 acres around that site, of which much of the campus (including a student residence hall named after him) is now comprised, Father Badin donated to Bishop Celestine de la Hailandiere of Vincennes, Indiana, who subsequently gave the land to Father Sorin.

The Badin Bible is a rare book. A three-volume edition of the Douay-Rheims version published by Mathew Carey in 1790, it was the first “Catholic” Bible for sale in the United States. Carey, an expatriate Irish journalist, printer and publisher in Philadelphia, issued and sold fewer than 500 copies at a time when Catholics were an extremely small minority (some 35,000 of 4 million, or roughly 1 percent) of the nation’s population.

Adding to this book’s distinction and historical significance is that it was given to Father Badin at his ordination in 1793, the gift of Bishop John Carroll of Baltimore, himself the first Catholic bishop of the United States. The Bible is inscribed to Father Badin by Bishop Carroll, who ordained him.

“Notre Dame’s acquisition of the Badin Bible will link Father Badin’s Kentucky home with his Indiana one, and his early ministry as a priest with his final resting place,” said Kathleen Sprows Cummings, director of the Cushwa Center for the Study of American Catholicism. “Far beyond the campus connection, however, Badin’s Bible represents a number of historic firsts in American Catholicism. This is a real treasure that will benefit the teaching and research of historians and Bible scholars at Notre Dame and beyond.”

The Bible will be on display in the Rare Books and Special Collections Room on the main floor of the Hesburgh Library during the fall semester. “The Badin Bible will be one of the most significant additions to the collection of Catholic Americana held in the Rare Books and Special Collections department of the Hesburgh Libraries,” said Catholic Studies librarian Jean McManus. “The later work of Stephen Badin, as a missionary to the Middle West, connects this Bible to the University of Notre Dame.”