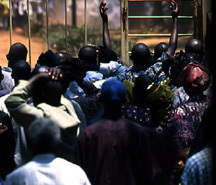 The University of Notre Dame will host a conference on genocide and the media titledWitnessing Genocide: Truth, Reconciliation and the Mediathat will take place April 6 and 7 (Sunday and Monday) in McKenna Hall.

Conference speakers include policy-makers, journalists, film critics, activists and genocide survivors from Rwanda, Darfur and the Holocaust.Focusing on the relationship between genocide and the media, the conference will examine how the experience of genocide victims is reported to the general public.

Juan Mendez, former special advisor to the U.N. Secretary-General on the Prevention of Genocide and former director of Notre Dames Center for Civil and Human Rights, will give the conferences opening remarks.Other speakers include Ellen Barry, a New York Times journalist; Rwandan genocide survivors Edige Kauranga and Father Emmanuel Ntakarutimana; and Thane Rosenbaum, a distinguished writer and law professor.Menachem Rosensaft, the founding chairman of the International Network of Children of Jewish Survivors, will give the closing remarks.

Beyond the Gates,a film directed by Michael Caton-Jones about the Rwandan genocide, will be shown as part of the conference April 6 (Sunday) at 7 p.m. in the Browning Cinema of the DeBartolo Center for the Performing Arts.