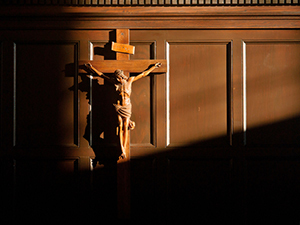 An ecumenical group of religious historians and other scholars will convene at the University of Notre Dame’s McKenna Hall on Dec. 5-6 (Thursday-Friday) for a conference titled “Catholics and Mormons: A New Dialogue.”

The conference will explore relationships among Catholics and Mormons as their churches are increasingly allied in common social, political and relief efforts. Its themes will include “The Lay of the Land: Contemporary Mormonism and Catholicism,” “Catholicism and Mormonism in Historical Context,” “Revelation: Scriptures, Traditions, and Authoritative Teachings” and “Theologies of Encounter, Unity, and Diversity.”

The conference will begin at 5 p.m. Dec. 5 (Thursday) in the McKenna Hall auditorium with a keynote address by Terryl Givens, James A. Bostwick Professor of English at the University of Richmond. A scholar of 19th-century literature and literary theory, Givens also is the author of numerous books and articles on Mormon history, culture and theology.

The conference is free and open to the public, and a schedule is available online at rooneycenter.nd.edu/news-and-events/2013-mormon-catholic-conference.