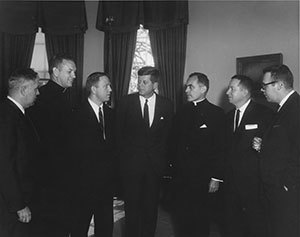 On the 50th anniversary of the assassination of President John F. Kennedy, the University of Notre Dame will ring bells and offer Mass in his memory.

Notre Dame also will recognize the anniversary before the Irish football game Saturday (Nov. 23) against Brigham Young University when the flag will be presented by G. Robert Blakey, one of the nation’s leading authorities on the tragic events 50 years ago. Blakey was the chief legal counsel and staff director for the U.S. House Select Committee on Assassinations and helped draft the President John F. Kennedy Assassination Records Collection Act of 1992. A graduate of the University, Blakey was elevated to emeritus status a year ago after teaching for more than 35 years in the University’s Law School.

Kennedy received Notre Dame’s highest honor, the Laetare Medal, in a White House ceremony two years to the day before his assassination. He received an honorary degree from the University in 1950.