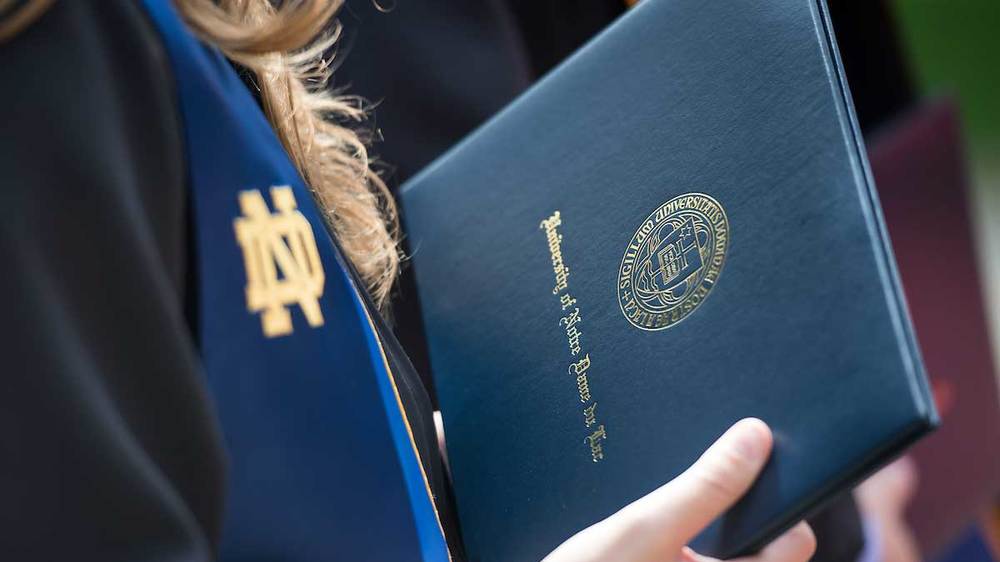 In consultation with our meteorologist due to expected rain showers that will likely diminish throughout the morning the University has determined that tomorrow’s commencement ceremony in the stadium will begin one hour later than scheduled. The stadium opens at 9 a.m.; students line up at 9:45 a.m., the academic procession begins at 10:30 a.m. and the ceremony commences at 11 a.m.

The University of Notre Dame will confer 3,100 degrees during Commencement Weekend Saturday and Sunday (May 19 and 20) on campus.

Degrees will be conferred on 2,065 undergraduate students at Notre Dame’s 173rd University Commencement Ceremony on Sunday. Brazilian Judge Sérgio Moro will be the principal speaker and recipient of an honorary degree. Sister Norma Pimentel, M.J., executive director of Catholic Charities of the Rio Grande Valley and longtime advocate for immigrants and refugees, will receive the 2018 Laetare (lay-TAH-ray) Medal, the oldest and most prestigious honor given to American Catholics.

In addition to Moro, five others will receive honorary degrees. They are Cardinal Blase J. Cupich, archbishop of Chicago, who was appointed by Pope Francis to the Congregation for Bishops and the Congregation for Catholic Education; William M. Goodyear, a member of Notre Dame’s Board of Trustees, a Fellow of the University and the retired chairman and chief executive officer of Navigant Consulting; Kamal Hossain, an internationally renowned jurist who is considered the father of the Bangladeshi constitution; Margaret Murnane, professor of physics and electrical and computer engineering at the University of Colorado; and Louise Richardson, the vice-chancellor (chief executive) of Oxford University and an Irish political scientist.

On Saturday, 406 students will receive master and doctoral degrees at the Graduate School Commencement Ceremony, along with 385 master’s degree students at the Mendoza College of Business Ceremony and 238 at the Law School Ceremony.

The academic processional will begin at 9:30 a.m. Sunday. All attendees must have a ticket for admission. Guests can enter the stadium beginning at 8 a.m. through Gate A on the northeast side and Gate B on the southeast side.

Many common items will be prohibited from entering the Stadium during Commencement. For a complete list of prohibited items, visit the Commencement website.