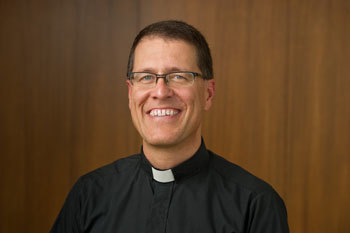 Rev. Paul V. Kollman, C.S.C., associate professor of theology at the University of Notre Dame, has been appointed executive director of the University’s Center for Social Concerns (CSC), effective July 1.

“Father Paul Kollman’s scholarship and teaching, his commitment to Catholic social teaching and his administrative experience all uniquely equip him for leadership of the Center for Social Concerns,” said Don Pope-Davis, vice president and associate provost for undergraduate studies.

Father Kollman has spent this semester teaching theology at Tangaza College in Nairobi.

“I’m humbled and honored to be asked to lead the Center for Social Concerns,” Father Kollman said. “I look forward to building on the vision of my predecessors, Center founder Father Don McNeill, C.S.C., and Father Bill Lies, C.S.C., and working with the host of talented and committed colleagues who have made the Center a vibrant place of engaged scholarship and service learning. I’m confident that together we can deepen the Center’s role in bringing together education of mind and heart, a goal long central to the mission of the Congregation of Holy Cross and of Notre Dame.”

Father Kollman’s theological scholarship and teaching concern African Christianity, mission history and world Christianity, and he has pursued research in eastern Africa, Nigeria and South Africa, as well as in Europe and the United States. He has published articles and reviews in numerous journals of theology, religious studies and African studies, and a 2005 book, “The Evangelization of Slaves and Catholic Origins in Eastern Africa.” He is at work on a book on the Catholic missionary evangelization of eastern Africa and a study of the Catholic Charismatic Movement in Africa.

Recently serving as acting director of the CSC, Father Kollman has worked with the center since 2004, and in 2009, with CSC assistant director Rachel Tomas Morgan, he was co-author of an article in the New Theology Review on the challenges and opportunities of service-learning at Catholic universities.