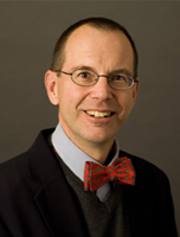 G.K. Chesterton famously described original sin as “the only part of Christian theology which can really be proved.” Not everyone agrees with Chesterton, but the abundance of evidence in support of his assertion is certainly compelling.

Familiarity with the effects of sin, overuse and abuse of the term and the exhaustion of religious vocabulary seem to have dulled the culture’s appreciation for this intrinsic element of human life and striving.

Notre Dame theologian Gary Anderson’s book, “Sin: A History,” recently published by Yale University Press, examines how understandings and descriptions of sin have changed over two millennia of biblical tradition, from the metaphors of physical burden, such as a scapegoat might ritually carry away, to the incurrence of those grave debts which followers of Jesus ask his Father to forgive.

Anderson, professor of Old Testament/Hebrew Bible at Notre Dame, argues that such metaphors have more than mere literary significance.

“When Jesus teaches his disciples to pray for the forgiveness of their debts,” Anderson says, “he gives witness to one of the most revolutionary moments in religious thought. For if sins are debts, then acts of virtue, like the giving of alms, are credits which fund a ‘treasury of merits in heaven.’ In the early church, the forgiveness of sin required some sign of personal amendment and pride of place went to acts of charity. For in serving the poor one was doing more than correcting social injustice, one was channeling the infinite merits won by Christ on the cross into a fallen world.”

According to James Kugel, Starr Professor Emeritus of Classical and Modern Hebrew Literature at Harvard University, Anderson’s book is “an extraordinary piece of detective work” which “shows how the central way of representing — and conceiving of — sin changed dramatically within biblical times, and how this change in turn came to be elaborated in later Judaism and Christianity. This is an extremely important, indeed, mind-changing book for anyone interested in the history of these two religions.”