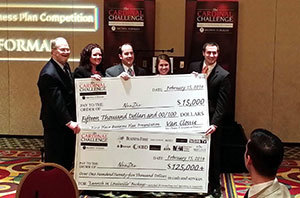 The team was honored for its business plan to commercialize an oral cancer detection device for dentists. All teams were judged on their written plan, the poise and professionalism of their presentation and the viability of their venture. The NanDio device’s simplicity of use, speed of test results and accuracy of the test as an early detector gave the team the winning edge.

Mimicking the real-world process of developing and growing new commercial ventures, including raising venture capital, students in the Cardinal Challenge developed business plans based on their own ideas and technologies or on those developed by others.

NanDio team members, along with faculty adviser Gaylene Anderson, senior commercialization officer at the Cleveland Clinic, focused their efforts on biomarkers and a novel membrane sensor technology. The biomarkers were developed at the Mike and Josie Harper Cancer Research Institute by graduate student Ben Miller and M. Sharon Stack, the Ann F. Dunne and Elizabeth Riley Director of the Harper Institute and professor of chemistry and biochemistry at Notre Dame. The membrane sensor was developed by Zdenek Slouka, a postdoctoral associate in the Center for Microfluidics and Medical Diagnostics (CMMD); Satyajyoti Senapati, a research professor in the Department of Chemical and Biomolecular Engineering, and Hsueh-Chia Chang, the Bayer Professor of Chemical and Biomolecular Engineering and director of the CMMD. Chang and Senapati are members of the Advanced Diagnostics and Therapeutics Initiative at Notre Dame. The research was supported by a Walther Cancer Foundation grant to professors Chang and Stack.

Each of the 12 challenge teams was also required to field a minimum of two but no more than five members, prepare an executive summary and present a 15-minute pitch describing the nature of the technology and potential of their proposal. This was followed by a 15-minute question-and-answer session during which the judges — more than 25 successful venture capitalists, entrepreneurs and business leaders — quizzed team members about their presentation.

As the winner, NanDio received $15,000; an invitation to the 2014 Global Venture Lab Investment Competition, which will be held May 1-3 in Austin, Texas; and a more than $125,000 “Launch in Louisville” package, which requires the winning team to locate and operate its business in Louisville within one year of receiving the award as well as an advertising package, $25,000 design and technical architecture services, logo development, a $10,000 cash economic incentive, website development, office space for a year and more.

The NanDio team consists of graduate students Ben Miller, and MBA student in the Mendoza College of Business; Patrick Rice, a student in the Engineering, Science & Technology Entrepreneurship Excellence Masters program; Marcy Kreimier, who is pursuing her master’s in patent law at Notre Dame; and Daniel Miller, an M.D. and Ph.D. predoctoral fellow at the University of Missouri School of Medicine; and faculty adviser Gaylene Anderson, senior commercialization officer at the Cleveland Clinic.