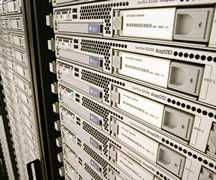 That may seem pretty ordinary, but in the world of supercomputing its, well, super.

The highly regarded Top500 Project released its biannual survey of the 500 fastest supercomputers in the world today and the supercomputer clusters powering Notre Dames new Center for Research Computing (CRC) were ranked 342 nd .

The rankings were presented at the 21 st annual International Supercomputing Conference inDresden,Germany, according to Dewitt Latimer, the Universitys chief technology officer.

Notre Dame has historically been associated with being top ranked in many areas,said Latimer, interim director for the CRC.This ranking indicates were very competitive with otherU.S.research universities.

We decided to run the Linpack Benchmark, which is used to compare overall computational speed, to see where we were in terms of tuning our supercomputer system,Sudlow said.We liked what we saw and in April decided to submit our score to the Top500.

Notre Dames result confirmed that the CRC deserved to be entered in thecompetition.

But a position in the Top500 can be fleeting.

The rankings over time flip around quite a bit,saidPeter Kogge, professor of computer science and associate dean for research in the UniversitysCollegeofEngineering.In the next Top500 competition, other institutions may outrun Notre Dame, and vice versa.

The Universitys Office of Information Technologies, Office of Research,CollegeofArtsand Letters,CollegeofScienceandCollegeofEngineeringcollaborated to establish the Center for Research Computing, which went online this past spring.

The real winners here are our researchers,Latimer said.Achieving a Top500 ranking is not the means to an end. Notre Dame recognizes the criticality of high-performance computing toward establishing a world-class research program and is committed to provide top-rated facilities to its research faculty. A good Top500 ranking just shows that we are making progress toward what we set out to achieve within the CRC.

The Top500 supercomputer competition began in 1993 and is held twice a year to provide a reliable basis for tracking and detecting trends in high-performance computing.