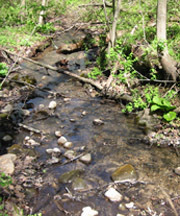 Jennifer Tank, Galla Associate Professor of Ecology at the University of Notre Dame, is one of the authors of a new study that concludes that streams and rivers can serve as essential filters that reduce the amount of nitrate pollution that is exported from the landscape to downstream lakes and coastal marine systems.

In general, ecosystems are becoming increasingly more saturated with nitrogen generated by human activities, such as agriculture or urbanization. Yet, only a quarter of the nitrogen applied to the landscape ends up in the oceans, suggesting that it is being removed by so-calledsinksbefore reaching oceans.

In a paper appearing in todays edition of the journal Nature, a team of 31 aquatic scientists, including Tank, delineate the crucial role that rivers and streams play in this process.

Nitrogen removal in streams is critical because it reduces the potential for eutrophication, or the excessive growth of algae and aquatic plants. Eutropication has been linked to a number of ecological problems, including algal blooms and oxygen depletion in areas such as the Gulf of Mexico. For example, in the Gulf region, nitrogen exports from the Mississippi River have helped create a vast zone of oxygen depletion that has hurt fisheries.

Tank and her colleagues undertook a large, three-year field study during which they added small amounts of a stable isotope tracer of nitrogen (N-15) to streams as nitrate, the most prevalent form of nitrogen pollution. The nitrate was added to 72 streams in the U.S. and Puerto Rico, including urban, agricultural and forest streams.

The researchers tracked the fate of that nitrate and found that it was temporarily removed from stream water via biological demand from aquatic organisms such as algae, fungi and bacteria. In addition, they found that a considerable portion was permanently removed from the streams by a bacterial process known as denitrification, where nitrate is converted to a harmless gas that escapes into the atmosphere.

In the second phase of the study, the scientists developed a model based on results from the field experiments that predicts nitrate removal as water flows through small streams into larger streams and rivers. The team notes in its Nature paper that the entire stream network was important in removing nitrogen pollution from stream water, but that streams and rivers are most effective in removing nitrate if they are not overloaded by nitrogen from fertilizers and waste from human activities.

For example, they warn that the increase in land conversion to support the production of biofuels may produce higher nitrogen loads to surrounding streams. This, in turn, would compromise the ability of streams and rivers to remove the nitrogen and result in more being delivered to coastal oceans.

Tanks ultimate research goal is to understand what factors control nutrient recycling and carbon dynamics in streams. She joined the Notre Dame faculty in 2000 after serving as an assistant professor of natural resources and environmental sciences at the University of Illinois.