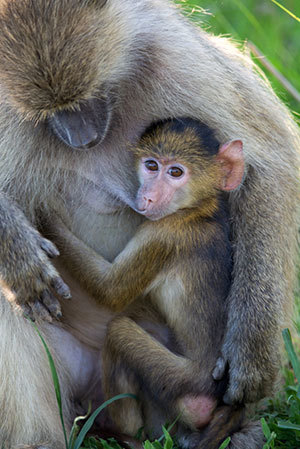 A new study by University of Notre Dame biologist Elizabeth Archie and the National Museums of Kenya examining yellow baboons over a 29-year period demonstrates that having offspring influences the health of female baboons.

Scientists are already aware that reproduction can be dangerous and energetically costly, exposing individuals to physical harm, infectious disease and reduced immunity. Archie and her fellow researchers used data collected as part of the Amboseli Baboon Research Project near Kilimanjaro, Kenya, to analyze how long-lived, slow-reproducing species such as primates adjust to the dangers of reproduction.

They detected 707 injuries to 160 female baboons between 1982 and 2011. The injuries of lactating baboons were about 21 percent less likely to heal in a given time period than those of non-lactating baboons. The researchers believe this may be because females are in poorer physical condition or have less energy in general. This influences how well a wound can heal, tissue is repaired and infections are curbed.

The analysis of the data makes it possible to predict the risk of injury to specific females by taking their ovarian cycle, dominance rank and age into account, as well as whether their social group is separating into two or more distinct groups. Ovulating female baboons are, for instance, twice as likely to be wounded as those who are in the less fertile days of their cycle. Such injuries occur in the context of reproductive competition through interactions with both adult male and female baboons.

The researchers note that it is not at all surprising that low-ranking female baboons experience higher injury risk than high-ranking females. Prior research has shown that these baboons are subject to more aggression and are less likely to be supported in conflicts than higher-ranking females.

Older females might incur more injuries because they take greater risks to make the best of their declining reproductive years, or because their health and resilience are generally failing. Old age has another drawback for female baboons: Older ones tend to heal more slowly than younger females, because immunity and subsequent wound healing commonly decline with age.

The Amboseli Baboon Research Project is one of the world’s longest-running studies of a wild primate. Trained observers there have made almost daily notes on yellow baboons since 1971.

The study by Archie and her fellow researchers appears in Springer’s journal Behavioral Ecology and Sociobiology.

Archie’s Notre Dame lab combines field work and genetics research to understand the causes and consequences of social behavior in wild mammals. Her research team examines how migration, mating and social patterns impact the genetics and evolution of a species and its fitness and susceptibility to diseases.