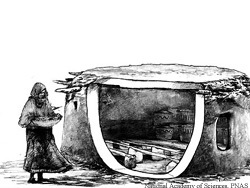 A new study coauthored by Ian Kuijt, associate professor of anthropology at the University of Notre Dame, describes recent excavations in Jordan that reveal evidence of the world’s oldest known granaries. The appearance of the granaries represents a critical evolutionary shift in the relationship between people and plant foods.

Anthropologists consider food storage to be a vital component in the economic and social package that comprises the Neolithic period, contributing to plant domestication, increasingly sedentary lifestyles and new social organizations. It has traditionally been assumed that people only started to store significant amounts of food when plants were domesticated.

However, in a paper appearing in the June 23 edition of the Proceedings of the National Academies of Sciences, Kuijt and Bill Finlayson, director, Council for British Research in the Levant, describe recent excavations at Dhra’ near the Dead Sea in Jordan that provide evidence of granaries that precede the emergence of fully domesticated plants and large-scale sedentary communities by at least 1,000 years.

“These granaries reflect new forms of risk reduction, intensification and low-level food production,” Kuijt said. “People in the Pre-Pottery Neolithic Age (11,500 to 10,550 B.C.) were not using new food sources, but rather, by developing new storage methods, they altered their relationship with traditionally utilized food resources and created the technological context for later development of domesticated plants and an agro-pastoralist economy.

“Building granaries may, at the same time, have been the single most important feature in increasingly sedentism that required active community participation in new life-ways.”

Designed with suspended floors for air circulation and protection from rodents, the granaries are located between residential structures that contain plant-processing instillations.

The new studies are a continuation of earlier research by Kuijt. As a graduate student from 1987-1995, he worked on and directed several field projects in Jordan that focused on the world’s first villages during the Neolithic Period. As part of this research, he did several days of excavation at Dhra’ with a Jordanian researcher. This was followed by several other field projects and by research from 2000 to 2005 with Finlayson.

“These granaries are a critical fist step, if not the very evolutionary and technological foundation, for the development of large agricultural villages that appear by 9,500 to 9,000 years ago across the Near East,” Kuijt said. “In many ways food storage is the missing link that helps us understand how so many people were able to live together. And much to our surprise, it appears that they developed this technology at least a thousand years before anyone thought they did.”

The Dhra’ research was funded by grants from Notre Dame, the National Science Foundation and the British Academy.

Kuijt, who joined the Notre Dame faculty in 2001, has worked extensively on Old and New World research projects. His research interests include the emergence of social inequality, prehistoric mortuary practices, the origins of agriculture, paleoenvironmental change and human adaptations, and lithic technology. He is the co-editor of “Complex Hunter Gathers: Evolution and Organization of Prehistoric Communities on the Plateau of Northwestern North America” and “Life in Neolithic Farming Communities: Social Organization, Identity, and Differentiation.”