The students received the Undergraduate Library Research Award (ULRA), which honors individuals who conduct original research and demonstrate exemplary skills through their broad use of library resources, collections and services for their scholarly and creative works.

Sponsored by the Hesburgh Libraries and the Flatley Center for Undergraduate Scholarly Engagement, with support from other campus entities, the ULRA provides students with a network of support and offers inspiration to those beginning original research or capstone projects.

“The Hesburgh Libraries are committed to advancing undergraduate research and scholarship,” said Edward H. Arnold University Librarian Diane Parr Walker. “Through our services, programs and expertise, we are partners with students to build research skills and capabilities that are critical to academic success on campus and in the world beyond graduation.” 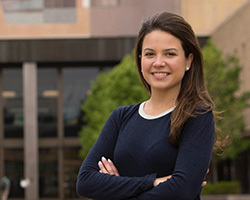 Mendoza won first prize in the senior/honors thesis category for demonstrating excellence in library research skills for her thesis, “Political Polarization in Venezuela under Hugo Chávez.” Michael Coppedge, professor of political science and faculty fellow at the Helen Kellogg Institute for International Studies, served as her adviser.

A political science major with minors in Latin American studies and Portuguese and Brazilian studies, Mendoza’s research suggests that, in many ways, the rise of Chávez in Venezuela 18 years earlier presaged the polarization sweeping electorates across the world in 2016.

Mendoza used library research guides, specialized data sets and other resources thanks to the guidance of librarians Doug Archer and David Dressing, who were essential in helping her locate and evaluate data. She also tapped librarians in the Center for Digital Scholarship to learn new technologies and apply the statistical techniques she learned in class. “I have grown as an independent researcher and my understanding of library research has entirely changed,” said Mendoza. “Hesburgh Libraries has molded my entire research process from planning to writing and everything in between.” 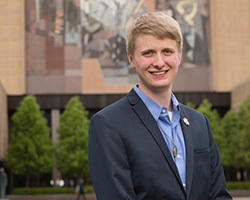 Honorable mention in the senior/honors thesis category was awarded to Donahue, who conducted extensive research for his thesis, “Writing of Paradise: The Marian Prayers Composed by the Franciscan Tertiary Sisters of the Pütrich Regelhaus Found in Cgm 4484 and Their Historical Context.” Donahue, a German and theology double major with minors in Medieval studies and the Arts and Letters Honors Program, was advised by Claire Taylor Jones, assistant professor of German.

Donahue’s personal goal has been “to contribute to filling the scholarly gap by writing a senior thesis on medieval theological manuscripts” since his first year when Rare Books and Special Collections curator David T. Gura allowed him to hold and then practice reading manuscripts. Donahue noted, “Dr. Gura planted a seed that developed into my senior honors thesis. Having the chance to see and hold these great artifacts lit a fire in my soul.”

Since that time, whether on campus or abroad, Donahue continued to access a range of library resources and digital collections. “The Medieval Institute on the seventh floor of Hesburgh Library was essential to my research, as were the library’s theology and reference collections. The library provided well-trained librarians and curators who were willing to work with me and assist in my research.” 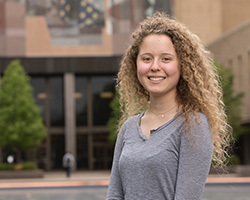 Garcia, the first-place winner in the 20000-40000 category, is a sociology major with a minor in teaching English to speakers of other languages. To fulfill a requirement for her seminar course, Garcia wrote a paper titled “Oliver Twists or Fagins?: Child Beggars in the UK in the 17th Century and Present Day.” She was advised by Mariana Candido, associate professor of history.

In her ULRA submission, Garcia described her path to becoming a more sophisticated scholar. She presented a detailed accounting of the various library resources and faculty expertise, notably Western European History Librarian Julie Tanaka, that helped her to develop her research topic, conduct diverse research methods and complete her paper on the differences in governmental attitudes toward child beggars in the United Kingdom in the 17th and 21st centuries.

“Through the Center for Digital Scholarship, I learned about the extensive resources in the Visual Resources Center, " said Garcia. “From coming up with a research idea, to finding sources, to outlining, writing and revising — the library and its vast array of resources have been central to my research experience.” 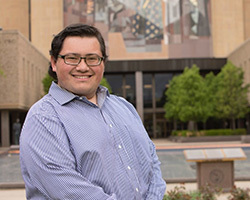 Jankowski, honorable mention recipient in the 20000-40000 category, is a sophomore double major in philosophy and Program of Liberal Studies with a minor in theology. His essay titled, “’Sehet! – Wen? – den Bräutigam!”: Matthew’s Jesus as Bridegroom in the Matthäuspassion of J.S Bach,” was advised by David Lincicum, associate professor of biblical studies/Christianity and Judaism in antiquity.

Jankowski’s interest in the topic began after reading Markus Rathey’s “Bach’s Major Vocal Works,” a musicological and theological background of Bach’s key choral compositions. His paper required interdisciplinary research in biblical studies, historical theology and musicology. Jankowski credits Alan Krieger, theology librarian, and Robert Simon, music librarian, for setting him on firm research paths. Jankowski was “awed at the breadth of the collections, particularly in theological monographs. In looking for articles, without access to ATLA and RILM, this project could absolutely have never reached the level of completion or understanding that it has.” 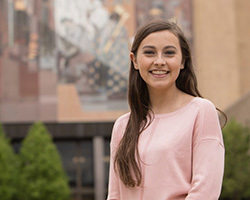 Reid, a First Year of Studies student who will major in accountancy and applied and computational math and statistics, took first place in the 10000 category. She wrote her Writing and Rhetoric paper titled “Hesburgh’s Relationships: The Success Story of the Tantur Ecumenical Institute ” and was advised by Arnaud Zimmern, Ph.D. student in English and instructor for Writing and Rhetoric.

Her research led her to gather history of ecumenism within the Catholic Church, to learn about the dynamics of Jerusalem and Jordan during the 1960s and early 1970s, and to analyze Father Hesburgh’s interpersonal skills as rhetorical skills. Reid notes, “The Tantur Institute’s lasting influence is only one example of how Father Hesburgh’s ability to relate to other human beings is at the heart of his worldwide success.” 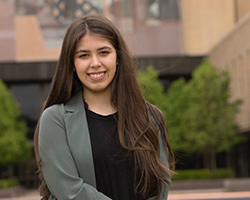 Maazouz, a First Year of Studies student who will major in chemistry and computing pre-professional studies and minor in the Hesburgh Program for Public Service, won honorable mention in the 10000 level category. She wrote “A Woman’s Manifesto: Effects of the Perceptions of Women in Society” as her final project in her Community-Based Writing and Rhetoric class. Her adviser was Erik-John Fuhrer, Ph.D. student in English and Presidential Fellow.

Maazouz created “A Woman’s Manifesto” as a visual documentation of her research into decades of data that illustrate that the degradation of women’s views of themselves is a result of the ideals set by society. She credits Daniel Johnson, English and digital humanities librarian, with guiding her to more efficiently search for relevant information and encouraging her to use both the Center for Digital Scholarship for underlying data and the One Button Studio for creating her final project. Maazouz said, “Notre Dame’s research resources have allowed me to encompass a creative, unique and effective approach to research and conveying new ideas.”

For more information on the Undergraduate Library Research Award and the 2017 winners, visit library.nd.edu/ulra/#winners