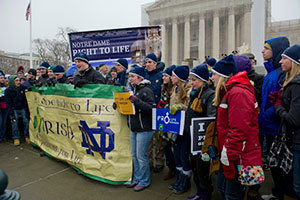 University of Notre Dame students, faculty, staff and alumni will be among the participants in the 2014 March for Life on Wednesday (Jan. 22) in Washington, D.C., which this year observes the 41st anniversary of the Supreme Court’s 1973 Roe v. Wade decision legalizing abortion.

The Notre Dame contingent will include more than 600 people, among them the University’s president, Rev. John I. Jenkins, C.S.C. Before the march, Father Jenkins will preside at a Mass for the Notre Dame marchers at 10 a.m. in St. Agnes Church, 1910 N. Randolph St., in Arlington, Va.

Simultaneous with the beginning of the Washington march and in solidarity with the marchers, the Notre Dame Alumni Association will sponsor a “Sanctity of Life” prayer service on campus at 1 p.m. Wednesday (Jan. 22) in the Grotto of Our Lady of Lourdes.

Last year, Notre Dame’s was among the largest of the march’s contingents, and Notre Dame students led it, carrying the large white “March for Life” banner along Constitution Avenue to the steps of the Supreme Court building on Capitol Hill.