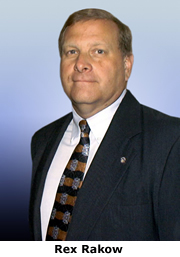 Rex J. Rakow, director of security police at the University of Notre Dame, died today at his home in Granger after a long illness.He was 55 years old.

Rakow, who directed Notre Dames Security Police Department since 1985, had been diagnosed with cancer in September of 2005.The serenity and courage with which he confronted his illness profoundly impressed Rakows colleagues and friends and were responsible for his being named co-chairman of Notre Dames American Cancer Society Relay for Life last year.

A calming presence in often stressful circumstances, Rakow was a quiet and wryly humorous man uniquely and ideally suited for his position.His character blended the unflappable competence of a law enforcement executive and the shrewdness of a street cop with the compassionate instincts of a loving parent.

Rex was a consummate professional in his service to law enforcement, civic life, and the University community,said Rev. Mark Poorman, C.S.C., Notre Dames vice president for student affairs.He was a respected leader, a trusted friend, an exemplar of Christian faith, and a devoted son of Notre Dame.We will miss him and remember him always, and we offer our prayers for Linda, his family, and all who mourn the loss of this loving and courageous man.May he rest in God’s eternal peace.

Rex Rakow’s leadership and community service was a central part of his life and faith,said Phillip Johnson, associate director of security police.He was a great mentor to many of us.He compassionately lived Notre Dames mission, values and vision and this distinguished him as a model of service and leadership. Rexs professionalism, quiet style, sense of humor and love for Notre Dame will shine on in our hearts forever.

Rakow was born inMishawaka.An alumnus ofClayHigh SchoolinSouth Bend,he was graduated fromIndianaUniversityinBloomingtonin 1973 and did postgraduate studies at Southern Illinois University inCarbondaleand at Notre Dame, from which he earned a master of science in administration degree in 1982.He also completed theFBINationalAcademys 13-week management training program in 1983.

Rakow married Linda S. Bollinger ofSouth BendonAug. 7, 1971.She survives, as do their two children, Derek and Stacy, their spouses, and four grandchildren.

In addition to his duties at Notre Dame, Rakow was an adjunct instructor in criminal justice atIndianaUniversityinSouth Bendand served as deputy coroner forSaint JosephCountysince 1997.

Widely regarded as a national leader in the field, Rakow served as president of the International Association of Campus Law Enforcement Administrators from 1993 to 1994.He also was active in many community service organizations.He was a member of the local chapter of the Governors Task Force to Reduce Drunk Driving and chaired it from 1987 to 1989.He also served as board president of LeadershipSouth Bend/Mishawaka from 1994 to 1996 and was a board member of the Alcohol andAddictionsResourceCenter.Former Indiana Gov. Joe Kernan appointed Rakow to the Indiana Law Enforcement Training Board.He also was appointed to the National Institute of Justice Law Enforcement and Corrections Technology Advisory Council.

Among numerous other honors, Rakow receivedIndianas Sagamore of theWabashaward in 2005 for service to Notre Dame, the local community and the state of Indiana.Last year he was made an honorary member of the Notre Dame MonogramClub and received an award from the Universitys student government for his outstanding service to the campus community.He recently received the Notre Dame Alumni Associations 2007 James F. Armstrong Award for service to the University.

Visitation will be from noon to 8 p.m. Friday (March 9) at the Hahn Funeral Home,505 W. 8 th Street,Mishawaka, and a funeral Mass will be celebrated Saturday (March 10) at 9:30 a.m. in Notre Dames Basilica of the Sacred Heart.

Memorial contributions may be made to the Center for Hospice and Palliative Care or The Cross in the Woods inIndian River,Mich.