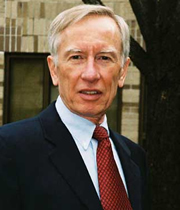 As the violent conflict between Israel and Hezbollah continues, a University of Notre Dame political scientist is urging the creation of a United Nations rapid reaction force that he believes could stop genocide and other crimes against humanity in this and other war-torn world regions.

Robert Johansen, a senior fellow at Notre Dames Kroc Institute for International Peace Studies, has for the past 30 years proposed the establishment of such a force, to be known as the United Nations Emergency Peace Services (UNEPS). The permanent agency could be mobilized and sent to any given emergency zone within 24 hours after receiving U.N. authorization.

Everyone knows that, at times, innocent people are ruthlessly killed simply because of their national, ethnic, racial or religious identities,Johansen said.We also know that such killings and other crimes against humanity are prohibited by existing international law. The international community could prevent many of these crimes if it would act quickly and send a professional security force to enforce the law.

Johansen notes that because members of the service would represent many different countries, the force would be more easily deployed than those from individual nations that might be reluctant to send their own units.

Johansen contends that an international U.N. response team could have put an end to genocide inRwandain 1994 and that there is great need for such a force in such places asSudansDarfurregion.

In an effort to step up the process of establishing UNEPS, Johansen helped create the independent Working Group for United Nations Emergency Peace Service and servesas its chief writer. The proposal has received support from such organizations as Human Rights Watch and the Union of Concerned Scientists. It also has been endorsed by Juan Mendez, the U.N. secretary-generals special representative for genocide (and a former Kroc Institute faculty fellow), and numerous legislators from national governments around the world. The U.S. House of Representatives Committee on International Relations has considered a resolution to create UNEPS as a force of 15,000 individuals.