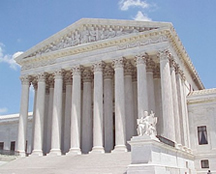 The Supreme Courts imminent decision on whether Osama bin Laden’s former personal driver may be tried by a special military tribunal instead of a civil court will indelibly mark Americas reputation as a protector of human rights, according to Douglass Cassel, Lilly Endowment Professor of Law and director of the Center for Civil and Human Rights at the Notre Dame Law School.

The United States Supreme Court ruling in Hamdan vs. Rumsfeld, expected within the next week, will be a benchmark for whetherAmericarespects international human rights standards,Casselsaid.

The driver, Salim Ahmed Hamdan, is among those imprisoned at the U.S. Navy base atGuantanamo Bay,Cuba.According to Cassell, the courts deliberations on his fate will involve the standards of the Geneva Convention and the Uniform Code of Military Justice, and whether a new law can barGuantanamoprisoners, orenemy combatants,from asking civil courts for habeas corpus relief.

The court heard arguments on the case in March, when the justices rigorously questioned the Bush administrations plan to bring foreigners believed to be involved in international terrorism beforeU.S.military tribunals.

Casseland former top lawyers for the International Committee of the Red Cross and the U.N. High Commissioner for Refugees, have submitted a friend of the court brief in the case.

A specialist in international human rights and international criminal law, Cassel joined theNotre DameLawSchoolfaculty this year, having previously directed the Center for International Human Rights at Northwestern University School of Law since 1998. He was the executive director of the International Human Rights Law Institute atDePaulUniversityCollegeof Law and of its Jeanne and Joseph Sullivan Program for Human Rights in theAmericasfrom 1990 until 1998. He has been a consultant to the United Nations, the Organization of American States, the U.S. Department of State, and the Ford Foundation.He also served as legal advisor to the United Nations Commission on the Truth forEl Salvador, advising the commission, supervising its investigations, and acting as principal editor of its report. His commentaries on human rights have been published in the Chicago Tribune and broadcast weekly on National Public Radio inChicago.

Professor Cassel is available for comment when the decision is made public.He may be reached at 574-631-7895 or " Cassel@nd.edu ":mailto:Cassel@nd.edu _.