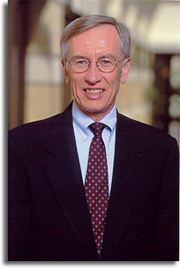 Such atrocities and genocides as the one now under way in Sudans Darfur region could be prevented by a permanent United Nations “emergency service,” according to Robert C. Johansen, professor of political science and senior fellow at the University of Notre Dames Kroc Institute for International Peace Studies.p. Johansen describes his proposal in an essay appearing in the Sept. 7 edition of the Christian Science Monitor. Numbering between 12,000 and 15,000 volunteers, the service would be based at a site designated by the United Nations, commanded by a designee of the U.N. secretary general with the approval of the security council, and would be able to deploy within 48 hours of U.N. authorization.p. “It would be an integrated service,” Johansen writes, “encompassing civilian, police, judicial, military, and relief personnel prepared to conduct all necessary functions in complex emergencies, so it would not lack the specialized professionals essential to succeed in peace operations.”p. Johansen argues that the service he envisions could not only bring immediate military protection to vulnerable populations marked for “ethnic cleansing,” but could also “gather evidence of crimes against humanity and arrest those committing them. It could hold detainees in a rights-sensitive international penal system until they can be indicted and tried by a tribunal operating under international standards of due process. The service also could begin emergency humanitarian assistance to victims fleeing previous raids, and provide security for humanitarian workers.”p. Estimating that the U.N. emergency service would cost the international body $2 billion to establish, and an annual $900 million to maintain, Johansen insists that the expenditure is as economically sensible as it is morally urgent. He cites studies which find that the international community spent some $200 billion in seven “major interventions” during the 1990s and asserts that “it could have saved an estimated $130 billion of that expenditure with a more effective preventive approach.”p. The 18-month conflict between the Sudanese government and its proxy Janjaweed militia, and two rebel groups, has forced more than 1.4 million people from their homes and left 30,000 to 50,000 dead. The U.N. has demanded that the government disarm the Janjaweed, withdraw its regular military forces from around the camps of displaced people and ensure international aid agencies free access to the Darfur region.p. _Contact: Robert C. Johansen, professor of political science and senior fellow at the Kroc Institute of International Peace Studies, at 574-631-6971 or Johansen.2@nd.edu _ p.