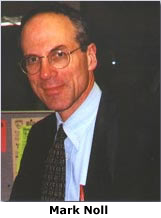 Mark Noll, a historian at the University of Notre Dame and one of the nations leading experts on evangelicalism, reacted today to the death of Rev. Jerry Falwell:

Jerry Falwell’s national importance depended, indirectly, on the success of Martin Luther King and other leaders of the Civil Rights Movement.Before the end of Southern segregation, it was almost impossible for a Southern evangelical to become a national political leader.Billy Graham pioneered as a Southern revivalist who spoke to the entire nation, but only by distancing himself from segregation and distinctly southern circumstances.It was the same, politically, for Lyndon Johnson and Jimmy Carter.But once segregation was legally ended, it was easier for all southern leaders to speak to the nation, which Falwell did by appealing to theologically conservative Protestants and through strategic alliances with other political conservatives.

Whatever one thinks of Falwell’s political positions, his career illustrates the emergence of the South as a national force , in religion as well as politics.

* Media Advisory: * _Nolls comments may be used in whole or in part. He can be reached for further comment at mnoll@nd.edu
_