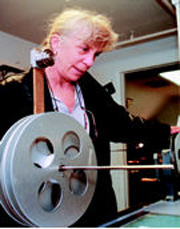 The release of filmmaker Michael Moore’s latest documentary, “Fahrenheit 9/11,” has spurred controversy, set off political fireworks and generated a buzz about the documentary genre itself, among movie audiences, critics and academics alike.p. University of Notre Dame filmmaker Jill Godmilow, who has produced and directed numerous documentaries (including “Antonia: A Portrait of the Woman,” which in 1974 was nominated for an Academy Award and won the New York Film Critics award), says that while many people expect a documentary to be objective and present solely the facts on its topic, in reality there is much more to the format.p. “Even though they take many different forms – like exposition, montage, even narrative or story form, like ‘Hoop Dreams’ – they all make the claim to be sober, semi-scientific documents of the real world, and thus ‘truthful,’” said Godmilow, a professor of film, television and theatre. “After all, they were shot with a camera – a mechanical instrument, like the microscope, or the X-ray machine, all of which just ‘image’ what’s in front of them.”p. However, Godmilow points out that the documentary is not simply a vehicle for conveying information; it also must meet the standards of movie-goers, who come to the theater with the expectation of being not just enlightened, but also entertained.p. “Though the documentary takes the stance of a sober, non-fiction vehicle for edification about the real world, it is trapped in the same matrix of obligations as the fiction film – to entertain its audience; to produce fascination with its materials; to achieve closure; to satisfy. This means, whatever its subject, it has to be honed into a shape that is culturally satisfying,” she said.p. Godmilow, who shares Moore’s political perspective and says she appreciates his efforts in countering the mass media’s gloss on the current political situation, watched “Fahrenheit 9/11” on opening day in New York City and left the theater “exhausted and tied up in knots.”p. “It was like reliving the last three years of pain and frustration condensed into two hours,” she said. “That’s a lot of pain – too much, I would argue. Moore always tries to overwhelm us and he succeeds every time. But why is the condition of being overwhelmed a healthy state of mind to think critically about the incredible mess we have created in the Middle East? If I could excise about 20 unnecessary cheap shots at Bush and his gang, then the really important work Moore has done with this film would shine through for more people, and stick.”p. In more than three decades of film and video making, Godmilow has earned a substantial reputation as a producer/director and is considered one of the primary theoreticians/practitioners in the American nonfiction genre. She has been a member of the Notre Dame faculty since 1992 and is the recipient of Rockefeller and Guggenheim fellowships and grants from the National Endowment for the Arts.p. Jill Godmilow is available for interviews at 574-631-7167 or godmilow.1@nd.edu.