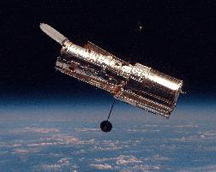 The outlook for the Hubble Space Telescope, which has appeared bleak, improved last week when NASA Administrator Sean O’Keefe told a U.S. House of Representatives subcommittee that robotic servicing of the observatory appears more feasible than the agency officials initially believed.p. However, Peter M. Garnavich, a University of Notre Dame astrophysicist, questions the feasibility of robotic options.p. “NASA’s interest in an unmanned mission to restore the Hubble Space Telescope is an encouraging sign that they are actually committed to achieving the best science,” Garnavich said. “It also demonstrates how inventive NASA engineers are when faced with a difficult problem. But an unmanned repair mission to Hubble has some major obstacles to overcome.”p. Hubble’s future was called into question in January when O’Keefe decided that using shuttle astronauts to service the observatory is too risky in light of the Space Shuttle Columbia disaster. Scientists expect Hubble to fail in 2007 or 2008 unless its gyroscopes and aging batteries are replaced.p. During its lifetime, the Hubble has given astronomers stunning images of the evolution of galaxies and the birth and death of stars, and O’Keefe’s decision resulted in public and congressional pressure to save the telescope. In response, NASA solicited alternatives to a space shuttle mission to service Hubble. During his testimony last week, O’Keefe said NASA will assess two or three robotic options and select the most promising by June for greater scrutiny.p. Garnavich feels such scrutiny will reveal serious obstacles.p. “First, such a complicated satellite will require money and time to build,” he said. "Most satellite missions take more than 10 years to go from initial study to launch, while Hubble will likely lose three-axis gyro control by 2007. A crash program would likely cost more than fixing the safety problems on the Shuttle.p. “Second, the unmanned mission would only fix the battery and gyro failures on Hubble. Fixing the fine guidance sensors and installing the new instruments is beyond the abilities of machines. It requires a human to do the complicated fix-up jobs and respond to unexpected problems.”p. Garnavich envisions a role for an unmanned mission to Hubble once the telescope has been repaired and completed its scientific mission.p. “An automated mission to end the Hubble mission makes sense,” he said. "A device that would attach to the telescope and make a controlled re-entry into the Earth’s atmosphere is the best way to reduce risk to astronauts and still safely remove Hubble from orbit. Such a mission is not needed immediately and could be designed and planned starting right now and launched in 10 yearsafter Hubble has accomplished its utmost in scientific return. But Hubble needs help soon, a much shorter time scale than NASA has ever executed a new mission from scratch.’p. Garnavich also feels that NASA needs to assemble an independent panel of experts to determine if there is additional risk to astronauts flying to Hubble versus flying to the International Space Station.p. “Certainly, no one wants another space shuttle accident,” he said. “But if we are going to continue to fly the shuttle, then we need to think of the best use of the money and risk involved.”p. Peter M. Garnavich, associate professor of physics, can be reached for further comment at pgarnavi@miranda.phys.nd.edu or 574-631-7262. p.