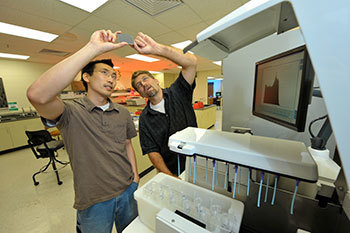 Researchers from the University of Notre Dame’s Eck Institute for Global Health have developed a “gene chip” to contribute to the identification of malaria drug resistance, an effort that will allow for real-time response in modified treatment strategies for this devastating disease.

The discovery is described in a paper appearing in the latest early online edition of the journal Science. The team of researchers includes Notre Dame’s Michael Ferdig, associate professor of biological sciences; doctoral student Becky Miller; and John Tan, managing director of the Genomics Core Facility, in collaboration with Tim Anderson of Texas Biomedical Research Institute and Francois Nosten, M.D., of the Shoklo Malaria Research Unit in Thailand.

“Malaria has tormented humans forever and continues to thwart comprehensive control efforts,” Ferdig said. “Resistance eventually emerges to every drug tried and vaccines are always ‘on the horizon’ but have not yet materialized.”

Artemisinin, a natural product from a plant used in China for centuries, is the latest candidate drug to combat multidrug-resistant malaria. However, this last line of defense against malaria worldwide is increasingly falling victim to the problem of malaria drug resistance. The loss of the drug would be devastating to malaria control efforts. 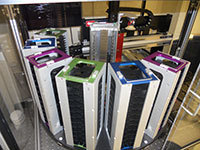 “For past drugs, most notably chloroquine, discovery of mutations causing resistance and an understanding of how resistance arose and spread has been ‘retrospective’: too late to do any good, after the drug has already failed,” Ferdig said. “We can use our novel method to see resistance as it is emerging, respond in real time and modify strategies to save a drug, such as protecting it with new formulations and combinations tailored to the specific location of emergence.”

The Notre Dame team, working with the project leaders at Texas Biomedical, used the new genomics and bioinformatics approaches to investigate malaria drug-resistance. Tan of Notre Dame’s Genomics and Bioinformatics Core Facility, working with Miller and other members of the Ferdig team, was instrumental in developing the gene chip to perform detailed genetic analysis of malaria patient samples. This chip can analyze 7,000 informative “SNPs” (single nucleotide polymorphisms) spaced evenly throughout the parasite genome.

“This gives researchers the ability to ‘see’ how the genome is changing under drug selection,” Tan said. “This is especially valuable in Southeast Asia because it is a hot spot for antimalarial drug resistance.”

Resistance has been confirmed in Cambodia and is emerging in Thailand. There has been no concerted use of artemisinin in Laos. These conditions enabled researchers to identify genome regions showing signatures of emerging drug resistance. The Texas group then zeroes in on these regions in more than 700 patients to find candidate genes that could be the cause of resistance.

“We now have markers for emerging resistance and new hypotheses that we will use to track down the resistance mechanism,” Ferdig said. “Together these will indicate new ways to adjust the use of artemisinin (most notably to modify the combinations of partner drugs) and to regulate the pace of resistance.”

Notre Dame’s Eck Institute for Global Health is a world-renowned collaborative research program focused on infectious diseases that impact the poor around the world.

“Notre Dame’s Strategic Research Initiatives, which led to the establishment of the Eck Institute and the Genomics and Bioinformatics Core Facility, has positioned the University to be a world leader in global health,” Bob Bernhard, Notre Dame’s vice president for research, said. “The Ferdig Lab’s partnership with the Texas Biomedical Research Institute is an illustration of the contributions our talented faculty and students can make in collaboration with other top research programs in the world toward solving the most difficult global challenges.”