From Junior Seau, former San Diego Chargers linebacker, to Dave Duerson, former Chicago Bears safety — who both committed suicide as a result of chronic traumatic encephalopathy (CTE) — traumatic brain injuries (TBIs) have been making disturbing headlines at an alarming rate. In the United States alone, TBIs account for an estimated 1.6 million to 3.8 million sports injuries every year, with approximately 300,000 of those being diagnosed among young, nonprofessional athletes. But TBIs are not confined to sports; they are also considered a signature wound among soldiers of the Iraq and Afghanistan wars. 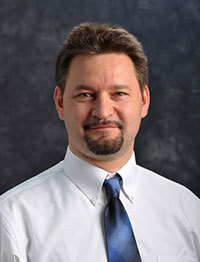 Although baseline tests of athletes prior to an injury are trending up, these tests must still be compared to examinations after an injury has occurred. They require heavy medical equipment, such as a CT scanner, MRI equipment or X-ray machine, and are not always conclusive. The Notre Dame team has developed a tablet-based testing system that captures the voice of an individual and analyzes the speech for signs of a potential concussion anytime, anywhere, in real time.

“This project is a great example of how mobile computing and sensing technologies can transform health care,” Poellabauer said. “More important, because almost 90 percent of concussions go unrecognized, this technology offers tremendous potential to reduce the impact of concussive and subconcussive hits to the head.”

The system sounds simple enough: An individual speaks into a tablet equipped with the Notre Dame program before and after an event. The two samples are then compared for TBI indicators, which include distorted vowels, hyper nasality and imprecise consonants.

Notre Dame’s system offers a variety of advantages over traditional testing, such as portability, high accuracy, low cost and a low probability of manipulation (the results cannot be faked); it has also proven very successful. In testing that occurred during the Notre Dame Bengal Bouts and Baraka Bouts, annual student boxing tournaments, the researchers established baselines for boxers using tests such as the Axon Sports Computerized Cognitive Assessment Tool (CCAT), the Sport Concussion Assessment Tool 2 (SCAT2) and the Notre Dame iPad-based reading and voice recording test.

During the 2012 Bengal Bouts, nine concussions (out of 125 participants) were confirmed by this new speech-based test and the University’s medical team. Separate tests of 80 female boxers were also conducted during the 2012 Baraka Bouts. Outcomes of the 2013 Bengal Bouts are currently being compared to the findings of the University medical team on approximately 130 male boxers.

The testing was done in cooperation with James Moriarity, the University’s chief sports medicine physician, who has developed a series of innovative concussion testing studies.