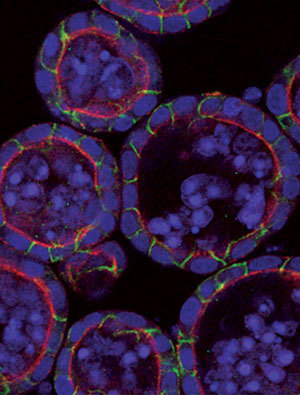 A pair of studies by a team of University of Notre Dame researchers led by Crislyn D’Souza-Schorey, professor of biological sciences, sheds light on a biological process that is activated across a vast range of malignancies.

Wnt proteins are a large family of proteins that activate signaling pathways (a set of biological reactions in a cell) to control several vital steps in embryonic development. In adults, Wnt-mediated functions are frequently altered in many types of cancers and, specifically, within cell subpopulations that possess stem cell-like properties.

In two studies, one in the recent issue of the journal Molecular and Cellular Biology and a second, published earlier this year in Science Signaling, D’Souza-Schorey’s laboratory reports on the importance of the protein “ARF6” in Wnt signaling.

The best documented role of Wnt is its triggering of the canonical (idealized or generalized) signaling pathway that leads to the stabilization of a protein called beta-catenin. This in turn leads to activation of various target genes that result in changes in a wide spectrum of cell behaviors.

“We have had a long-standing interest in understanding the role of ARF6 in cell behavior,” D’Souza-Schorey said. “ARF6 is an interesting molecule at the nexus of several important cell-signaling pathways. Our interest in this line of investigation has only been heightened by emerging reports from many labs that ARF6 activity is dramatically increased in several cancers. In our most recent study, we show how ARF6 can propagate Wnt signaling leading to proliferative phenotypes that are frequently seen in epithelial tumors (a growth of irregularly shaped cells on the outer membrane of an organ or gland).”

In the paper published in Science Signaling, the laboratory collaborated with researchers at the University of Utah to document the importance of ARF6-regulated activation of canonical Wnt signaling in the spread of melanoma. The study showed that a small molecule that prevents ARF6 activation could stop tumor invasion and the spread of the cancer.

“The relevance of Wnt signaling in human cancers is manifest by the frequency with which this pathway is aberrantly activated across a wide range of malignancies,” D’Souza-Schorey said. “Given the number of Wnts, Wnt signaling has been difficult to target therapeutically. It is important to note that while there are many mechanisms that drive aberrant Wnt/beta-catenin signaling in diverse cancers, these different mechanisms nearly always occur in a mutually exclusive manner. Thus, a better understanding of mechanisms involved in Wnt signaling transduction offers several target molecules for cancer drug development.”