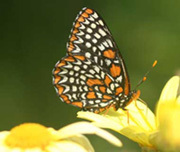 Three University of Notre Dame researchers are among the authors of a new paper that describes a ground-breaking tool designed to help policy makers determine when and how to use an environmental strategy known as “managed relocation.”

Jessica Hellmann and Jason McLachlan, assistant professors of biology, and Alejandro Camacho, associate professor of law, are part of a multi-disciplinary working group that produced the paper, which appears in this week’s edition of the Proceedings of the National Academy of Science. David Richardson of Stellenbosch University in South Africa led the writing of the paper. Hellmann and McLachlan co-led the working group, which is funded by the National Science Foundation and the private Cedar Tree Foundation, and they will host the final group meeting at Notre Dame in August.

Managed relocation, also known as “assisted migration,” has emerged as a possible means of preserving species endangered by rapid climate change and other environmental threats. The concept involves picking a species up and moving it potentially hundreds of miles to a place thought to be more accommodating, but which is outside of the species’ native range.

The strategy has been a source of strong feelings and controversy among conservation biologists. Some scientists and policy experts fear that the relocated species could harm their new habitats, cause extinctions of local species, or create further environmental problems, as has been the case with invasive species.

These concerns are shared by members of the working group. However, they contend that the rapid pace of climate change makes it critical that scientists and policy makers begin to assess such actions now. This urgency does not mean that they advocate acting precipitously, however, and the authors have developed this tool to make informed decisions with areas of uncertainty clearly delineated.

The tool uses multi-disciplinary criteria for to score a proposed relocation. The criteria include possibility of success of the proposed relocation, its potential for harming the new ecosystem, existing and potential regulatory context for translocation, and the social and cultural importance of the impacted species.

Hellmann, McLachlan and Camacho point out that the tool does not, by itself, produce management recommendations. They note that even within the working group, disagreements still arise over the ethics and efficacy of the managed relocation strategy.
Rather, the tool can help stakeholders in the process identify the sources of their disagreements so that these may be discussed and evaluated, leading to a more thoroughly vetted decision to implement, or reject, such an adaptation strategy.

The working group notes that managed relocation is only one strategy under consideration for addressing climate change. Others include fertilizing the oceans to increase their absorption of greenhouse gases and preserving the genetic diversity of threatened species in seed banks. Their hope is the tool will provide a useful analysis of all such proposed approaches.

They also feel that it will prove useful in considering environmental strategies not directly related to endangered species, such as the suggestion that foresters plant certain species of tress beyond their northern range boundaries for timber harvest or the desire by some stakeholders to relocate aesthetically or culturally valued species outside their historic range. Such activities may take place as humans grapple with how natural resources should be managed as the climate changes.

Hellmann, who joined the Notre Dame faculty in 2003, is studying the ways in which local and regional climatic effects are altering population dynamics. She uses insects and plants in grassland ecosystems to understand the effects of climate on nature.

McLachlan, a Notre Dame faculty member since 2006, uses the lessons of past environmental change to understand how climate change, habitat fragmentation and the arrival of new species and diseases affect forests and other plant communities.

A member of the Notre Dame faculty since 2005, Camacho specializes in the study of regulatory innovation in environmental and land use la,w including the adaptation of regulatory institutions in response to climate change.

More information on the working group can be found at:
http://www.nd.edu/~hellmann/MRWorkingGroup/.