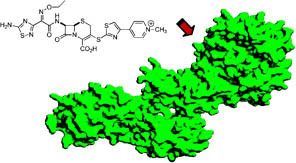 MRSA first emerged in the United Kingdom in 1961 and spread rapidly across the globe. Modern strains of MRSA are broadly resistant to antibiotics of various classes, but resistance to β-lactam antibiotics, which include penicillins, cephalosporins, and carpapenems, is an acute problem because it impacts virtually all commercially available members of the class. 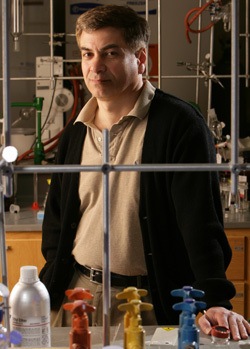 The efforts paid off, as Peng demonstrated the presence of N-carboxylated lysine in the protein and showed that it undergoes N-decarboxylation on binding to the antibiotic in solution. Baker visualized both the N-carboxylated lysine in the x-ray crystal structure of the uncomplexed form and showed that when the antibiotic complexed with the protein, the N-decarboxylation switch resulted in a stable complex critical to the manifestation of resistance.

The lysine N-decarboxylation switch triggers MRSA’s antibiotic sensor domain to adopt the active state that leads to all the subsequent biochemical processes that enable resistance, an event that was investigated by computational analyses in the Mobashery lab in the present study.

The importance of this lysine N-decarboxylation switch for MRSA rests in the fact that the organism does not mobilize its resources until and unless it is exposed to the antibiotic. As such, in an economy of existence, the MRSA conserves its resources until BlaR1 informs it that it has come in contact with a β-lactam antibiotic.

The research paper describing the team’s findings appears in the Journal of Biological Chemistry.