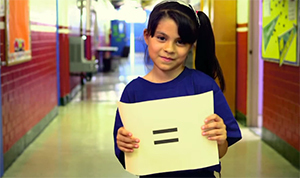 It’s both the bane of many parents and what has been called a major national vulnerability: the inability of many children to understand mathematics. Understanding that problem and developing strategies to overcome it is the research focus of Nicole McNeil, Alliance for Catholic Education (ACE) Associate Professor of Psychology at the University of Notre Dame, and the researchers in her lab.

A new paper by McNeil and Emily Fyfe, a former Notre Dame undergraduate who’s now a doctoral student at Vanderbilt University, examines if the labels educators use to identify patterns affects preschoolers’ understanding of patterns.

“Patterns are things, such as words or numbers that repeat in a logical way,” McNeil said. “For example, the stripes on an American flag are laid out in a repeating pattern of red, white, red, white, etc. Children’s ability to identify and create patterns is an important early math skill that supports their social and cognitive development. In fact, research has shown that teaching children about patterns improves their achievement in reading and mathematics.”

Members of the CLAD (Cognition, Learning and Development) Lab that McNeil directs at Notre Dame recently collaborated with Fyfe and other colleagues at Vanderbilt University to examine if the labels educators use to identify patterns affects preschoolers’ understanding of patterns. They compared concrete labels, which refer to the changing physical features of the pattern (e.g., “red, white, red, white”), to abstract labels, which describe the pattern using an arbitrary system that mimics the pattern (e.g., “A, B, A, B”). Children in the study solved a set of patterning problems in which they watched an experimenter explain a model pattern using either concrete labels or abstract labels and then tried to recreate the same pattern using a different set of materials.

“Children who were randomly assigned to the abstract labels condition solved more problems correctly than those assigned to the concrete labels condition,” McNeil said. “Thus, even though concrete labels seem better because they are more familiar and accessible to children, abstract labels may help focus attention on the deeper structure of patterns. These findings suggest that something as minor as the types of labels used during instruction can affect children’s understanding of fundamental early math concepts.”

This research result converges with several other findings from McNeil’s lab in recent years that have shown that relatively minor differences in the structure of children’s input can play a role in shaping and constraining children’s understanding of fundamental math concepts.

“Researchers and educators often focus on the macro-level environmental differences (like quality of early child care setting) and how they affect cognitive development,” she said. “However, a growing body of research suggests that even differences in relatively specific, microlevel factors can affect how children understand certain concepts. I think this means that we need to be very purposeful about structuring lessons and our instructional input to ensure that we are setting children up to construct an understanding of the most important concepts.”

Although the McNeil lab’s research is primarily focused on mathematics, the results may possibly be applicable to other areas of learning such as reading and spelling.

“I don’t want to go too far beyond our data here, but I would say that the general idea would hold broadly,” McNeil said. “Relatively small differences in how a particular concept is presented can affect the knowledge that children construct about that concept. In terms of the specific finding about abstract labels, I would say that it would be most important in domains in which we want children to focus on the deeper structure of things, rather than just on the specific concrete instance we are using to teach them the concept. So, for example, children’s learning of the scientific method and how to control variables in experimentation may be another domain where abstract labels could be more helpful than concrete labels because we want children to transfer the more general concepts beyond the specific examples they are learning on.”

McNeil, along with colleagues at the nonprofit research agency West Ed, also recently received a $3.5 million grant from the U.S. Department of Education’s Institute of Education Sciences, which aims to improve students’ mathematical achievement in elementary school and beyond.

The new grant, the largest grant awarded to McNeil’s work, will allow a large-scale trial of an educational intervention McNeil and her CLAD Lab research team have developed to boost math learning by helping students grasp the concept of mathematical equivalence. Such a concept supports problem solving reflected in a statement such as “two plus two equals four.”

The lessons and activities she proposes for elementary schools to change students’ learning about mathematical equivalence have been used successfully at Santa Cruz Catholic School, a Notre Dame ACE Academies school serving inner-city children in Tucson. Several second-grade ACE teachers from around the country served as participants in the pilot study and helped refine McNeil’s approaches.