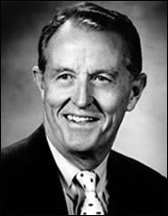 The University of Notre Dame has received a $20 million gift from the estate of alumnus Frank E. Eck to support the Center for Global Health and Infectious Diseases, a world-renowned collaborative research program that will be renamed for the Eck family.

It is impossible to exaggerate the significance of Franks generosity in making Notre Dame what it is today,said Rev. John I. Jenkins, C.S.C., the Universitys president.His munificence has made a difference in so many areas – from law and engineering to our visitorscenter and athletics facilities. For this most recent gift, as well as all of his support, his alma mater is immensely grateful. We miss his presence, but celebrate his enduring legacy.

Dennis Jacobs, vice president and associate provost, added:Notre Dames efforts to control the spread of tropical diseases through innovative laboratory studies and international fieldwork epitomize science in service of humanity. It is fitting that a man of Franks acuity and compassion would make a gift that will significantly enhance Notre Dames research endeavors to lessen human suffering, especially among the worlds poorest and most vulnerable.

Originally established as the Vector Biology Laboratory, the Eck Family Center for Global Health and Infectious Diseases at Notre Dame has engaged in groundbreaking work for more than four decades. The late biologist George B. Craig Jr. and the late biological sciences professor Paul P. Weinstein were Notre Dame pioneers in the field. Craig was one of the worlds foremost experts on mosquitoes and their disease-carrying capabilities. Weinstein, formerly the director of the Laboratory of Parasitic Diseases at the National Institutes of Health, founded the Parasitology Research Group at Notre Dame.

Today, dozens of faculty, staff and students, primarily in the Department of Biological Sciences, but increasingly from other disciplines on campus, seek to alleviate disease, suffering and death caused by infectious pathogens in the world’s underserved populations. Current research and projects are focusing on diseases such as malaria, leishmaniasis, toxoplasmosis, yellow and dengue fevers, tuberculosis, West Nile encephalitis, and lymphatic filariasis.

The $20 million gift from the Eck estate will support the addition of endowed faculty and research technicians, establish the center as a nexus for field and laboratory research in infectious disease at the University, provide resources to bring authorities to campus to speak on pressing global health problems, and help fund fieldwork in developing countries such as Notre Dames efforts to eliminate elephantiasis in Haiti.

A 1944 graduate of Notre Dame, Eck was chairman of Advanced Drainage Systems (ADS) of Columbus, Ohio. He earned his bachelors degree in chemical engineering and served on the College of Engineering Advisory Council from 1984 until his death last December.

After serving in the U.S. Navy in the latter stages of World War II, Eck attended Harvard Business School and earned a masters of business administration degree in 1949. He worked for more than 20 years in the petrochemical industry, then joined ADS in 1973 as vice president for sales and marketing. He soon was appointed president of the firm and took it from a small regional manufacturer serving the agriculture market to the worlds largest producer of plastic drainage pipe used primarily in the civil engineering industry.

Contributions to Notre Dame from Eck now total more than $55 million. Prior to his gift to the global health center, Ecks most recent contribution to the University was a $21 million gift in 2005 to underwrite the current construction of the Eck Hall of Law, which includes a new building for the Notre Dame Law School and a multipurpose facility in a neo-Gothic archway that will link the new structure to the existing building. The gift was the fifth largest in Notre Dames history, the largest ever to the Law School, and one of the largest in the history of American legal education.

Ecks previous benefactions to Notre Dame endowed a library collection in chemical engineering, and underwrote construction of the Eck Tennis Pavilion in 1987, Frank Eck Baseball Stadium in 1994, and the Eck Center, which includes the Hammes Notre Dame Bookstore, visitorscenter and Alumni Association headquarters, in 1999.

A longtime supporter of the Irish football, baseball and tennis programs, Eck was made an honorary member of the Notre Dame Monogram Club in 1988.

The gift is a component of the $1.5 billion Spirit of Notre Dame capital campaign. Announced last year, the campaign is the largest such endeavor in the history of Catholic higher education.