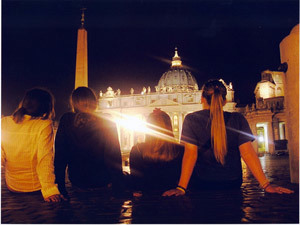 Bonding in Italy at one of the holiest sites in Christendom.

The University of Notre Dame ranks ninth in percentage of students participating in study abroad programs among American doctoral/research institutions, according to a report released by the Institute for International Education (IIE).

During fall 2010, spring 2011 and summer 2011, the focus of this year’s study, 59.7 percent of Notre Dame students had participated in study programs in other countries, a 2.8 percent increase over the previous year. The University of San Diego ranked first in the IIE report with an 86.8 percent participation rate, followed by Pepperdine University at 75.9 percent. Notre Dame ranked ninth last year as well.