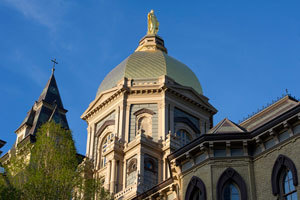 For the second year in a row, the University of Notre Dame is the No. 4 “dream college” among parents of college applicants, the Princeton Review reported in its annual “College Hopes and Worries” survey.

The Princeton Review surveyed 9,955 prospective students and 4,170 parents for the results. Respondents from all 50 states as well as the District of Columbia and abroad filled out the 15-question survey.

The Princeton Review is a New York-based company that sells its services and books to assist college applicants in improving performances on standardized tests and in navigating the admissions process. It is not affiliated with Princeton University.

Notre Dame has been ranked in the top 10 of the Princeton Review survey each year since the survey’s inception in 2003.