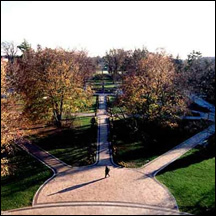 The University of Notre Dame raised a record $180.7 million in cash contributions in the fiscal year that ended June 30, and set several other fund-raising records for the year, according to a report presented Friday to the Board of Trustees.

The total, which does not take into account pledges of future gifts, exceeded the previous high of $173.7 million set in 2004, a year in which the University received the largest contribution in its history, a $50 million bequest from the estate of Joan Kroc.

We are pleased and humbled by the support provided by Notre Dame benefactorsalumni, parents and other friends of the University,said Louis M. Nanni, vice president for University Relations.This record year in fund raising is tangible evidence of the enthusiasm in the Notre Dame family for the bold vision of our new president, Father John Jenkins. Indeed, Notre Dame benefactors are our co-creators in this venture, advancing the mission and tradition of the University in exceptional and exciting ways.

We are blessed at Notre Dame to have benefactors who believe in our multi-faceted goal – to advance in the ranks of the nations leading research institutions, stay true to our excellence in undergraduate education, and remain firmly committed to our Catholic identity,Father Jenkins said.These fund-raising records are a tribute to the loyalty and insight of the Notre Dame family and the hard work of our dedicated development team.

In addition to the overall gift total, the University set records for unrestricted giving, the percentage of alumni who contributed, pledges and overall production.