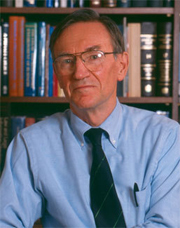 Donald Kommers’ account of how he spent last semester might at first remind a listener of a high-spirited adolescent’s description of a particularly exhilarating vacation.

“I was living, working, writing, dining and interacting daily with a diverse group of astounding people,” he said. “I was surrounded for five months with 11 of the smartest people I’ve ever met.”

Kommers, the Joseph and Elizabeth Robbie Professor of Political Science and professor of law in the University of Notre Dame Law School, spent the semester in Germany as the recipient of a Berlin Prize Fellowship from the American Academy. In residence there from early January to late May, he studied and wrote about Germany’s constitutional culture, a subject on which he was sufficiently authoritative to have earned an honorary degree a decade earlier from Heidelberg’s Ruprecht-Karls-University “for advancing cooperation between American and German legal scholars and for the role his publications have played in bringing Germany’s constitutional jurisprudence to the attention of Anglo-American legal audiences.”

A considerable amount of his enjoyment was undoubtedly derived from the prestige of the Berlin Prize itself. The academy awards 10 to 12 of them each semester, choosing from a vast pool of applicants representing the arts, humanities, literature, history, journalism and politics.
Kommers’ companion fellows included the novelist Don Antrim; the New Yorker writer Adrian LeBlanc, who was at work on a book on the place of stand-up comedians in American culture; Chuck Lane, an editorial writer for the Washington Post and his colleague Mike Dobbs, who had just published a best-selling book on the Cuban missile crisis and was working on a book on the Potsdam conference of 1945; the New York painter Amy Sillman; and the symphonic composer Dan Visconti, who composed four pieces during his stay in time for a Berlin Philharmonic Orchestra performance last month.

“Along with them there were a couple of more pedestrian types such as myself,” Kommers said. “I was the oldest, and sometimes called ‘the Patriarch.”

His self-deprecating apostrophe notwithstanding, Kommers himself was in fact a good deal more than an antiquated caboose on that glittering train. During his stay, in addition to working on his forthcoming book, “Red, Black, and Gold: Germany’s Constitutional Odyssey,” he gave a lecture on “Constitutional Change and Continuity in Germany: 1949-2008.”

“I’m a little nervous about it,” he had confessed beforehand. “All the more so since I shall be speaking to a German audience about their own constitution, and this year is the 60th anniversary of the constitution of 1949.”

Preceded by an elegant dinner, moderated by Dieter Grimm, a former justice of the Federal Constitutional Court, Germany’s equivalent on the U.S. Supreme Court, and attended by Germany’s academic, intellectual and cultural elites, the lecture was “much to my surprise,” Kommers insisted, “well received,” and became the subject of an article a few days later in the Frankfurter Allgemeine Zeitung, Germany’s leading newspaper.

The lecture had to do with constitutional change in Germany and how the constitutions of both the Federal Republic and the United States had been adjusted to their imperfections over the years.

“Along the way, I was able to draw important contrasts between their constitution and ours,” Kommers said. “I also argued that Germany’s Basic Law (its constitution) and its high constitutional court has replaced our own Constitution and the Supreme Court as the leading models of constitutional governance around the world and that we Americans have been saddled with an 18th century constitution that is almost impossible to change owing to the difficulty of its amendment, which partly accounts for the tremendous power of the Supreme Court. Many features of our constitution have become obsolescent as a consequence. The deficiencies I mentioned include the Electoral College, equal representation of the states in the U.S. Senate, our lame-duck presidency and Congress, life-time tenure for Supreme Court justices, among other provisions that we Americans would not adopt if we were given the chance to write a new constitution.”

For all of his pre-lecture jitters, Kommers had shown up fully prepared and equipped. Of his major scholarly publications, some 50, roughly half of them, concern Germany and its politics, constitution and highest court. He had been preparing for this event, which even he acknowledges would be “a fitting capstone for any academic career,” for a long time.

A member of the Notre Dame political science faculty since 1963, he joined the faculty of the Notre Dame Law School in 1975, becoming the second director of the University’s Center for Civil and Human Rights. During his career, along with his prolific scholarship, Kommers taught a constitutional law course taken by some 4,000 students.

“I doubt if I could have achieved this academic record had it not been for Notre Dame and the support that I have received over the years, decades really, from the College of Arts and Letters, the Political Science Department, the Law School, and the Graduate School,” he said. “Notre Dame, like the American Academy in Berlin, is a wonderful place to teach and get one’s work done. Nowhere else, I dare say, would I have had the kind of supportive research and teaching context that I have enjoyed here.”
So what was he so nervous about, anyway?