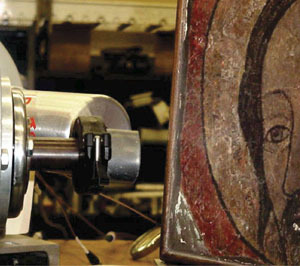 University of Notre Dame nuclear physicists Philippe Collon and Michael Wiescher are using accelerated ion beams to pinpoint the age and origin of material used in pottery, painting, metalwork and other art. The results of their tests can serve as powerful forensic tools to reveal counterfeit art work, without the destruction of any sample as required in some chemical analysis.

Their research is featured on the front cover of the current issue of Physics Today in an article titled, “Accelerated ion beams for art forensics.” Wiescher and Collon say, “Art experts play an important role in identifying the style, history and context of a painting, but a solid scientific basis for the proper identification and classification of a piece of art must rely on information from other sources.

“A host of approaches with origins in biology, chemistry and physics have allowed scientists and art historians not only to look below a painting’s or artifact’s surface, but also to analyze in detail the pigments used, investigate painting techniques and modifications done by the artist or art restorers, find trace materials that reveal ages and provenances, and more,” Wiescher and Collon continue.

The information that is revealed can shed light on trading patterns, economic conditions and other details of history. For example, the amount of silver in Roman coins can indicate the degree of inflation in the ancient economy.

Laboratories in Europe, including several in Italy and one in the basement of the Louvre in Paris, have accelerators dedicated to the forensic analysis of art, and archaeological artifacts. These accelerator-based techniques have allowed not only to analyze the works themselves, but also to determine origin, trade and migration routes as well as dietary information. As an example, the analysis of the ruby eyes in a Babylonian statue of the goddess Ishtar using the Louvre’s accelerator showed that the rubies came from a mine in Vietnam, demonstrating that trade occurred between those far-apart regions some 4,000 years ago.