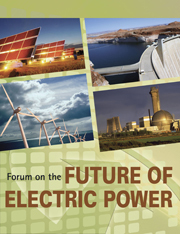 A panel of energy industry experts will discuss the future of electric power and energy Feb. 25 (Wednesday) from 3 to 5 p.m. in the Center for Continuing Education at the University of Notre Dame.

The discussion, which will be led by moderator Joan F. Brennecke, Keating-Crawford Professor of Chemical and Biomolecular Engineering and director of the Notre Dame Energy Center, is free and open to the public.

The forum is part of the University’s yearlong emphasis on global energy, which was introduced during the 2008 Notre Dame Forum on Sustainable Energy.

Sponsored by the Energy Center and the College of Engineering and coordinated by Frank P. Incropera, the Clifford and Evelyn Brosey Professor of Aerospace and Mechanical Engineering and Engineering Dean Emeritus, the panel features four experts in the field:

Panelists were chosen on the basis of their extensive experiences over a broad array of energy-related issues. Topics to be discussed include the challenges confronting major utilities, including constraints on carbon emissions; the role of private equity firms in advancing power generation, transmission and distribution infrastructure; the implications of deregulation; the role of renewable energy; and the future of renewable portfolio standards.

According to Incropera, power production today is at a crossroads.

“Electricity is critical to maintaining an acceptable standard of living,”he said.“The issues are many, and they encompass the role of nuclear power and renewable energy, the future of coal-fired plants, as well as economics and public policy. At stake is the human condition: How do we transition to an energy future that meets needs in ways that are economically and environmentally acceptable?”