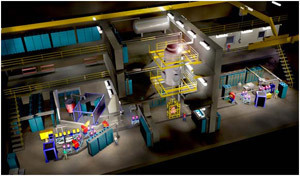 The figure shows an artist conception of the facility as presently planned, consisting of two high-intensity, low-energy accelerators.

Nuclear physicists at the University of Notre Dame have received a one-year, $1.6 million grant from the National Science Foundation (NSF) for continuing research and development of the first U.S.-based underground accelerator laboratory, the Dual Ion Accelerator for Nuclear Astrophysics (DIANA). The purpose of the facility is to directly study nuclear reactions that drive the burning of stars in the laboratory and will complement the experimental program at the newly installed heavy ion machine at the Notre Dame Nuclear Science Laboratory.

The grant will allow the group to finalize the design and provide a budget baseline for the final NSF decision on funding and construction of the facility. DIANA will be located at a deep underground site, deep enough to shield the facility against cosmic ray-induced background radiation that would conceal the signals obtained from the reaction measurements. Several options are presently being discussed and the final site decision will be made within this year.

DIANA will use two relatively small particle accelerators to mimic the nuclear reactions in stars. It will consist of two high-current accelerators, a 30 to 400 kV variable, high-voltage platform, and a second, Pelletron-type accelerator with a voltage range of 350 kV to 3 MV.

The DIANA project addresses the need for a next-generation, low-energy underground accelerator facility. Compared to existing astrophysics facilities, DIANA could increase the available beam densities on target by magnitudes: up to 100 mA on the low-energy accelerator and several mA on the high-energy accelerator. The proposed laboratory will provide not only significantly greater capabilities in ion beam intensity, but also greater ion species and energy range.

Michael Wiescher, director of the Joint Institute for Nuclear Astrophysics and principle investigator, said, “The NSF funding will open a new opportunity to study nuclear reactions at the energies of stellar burning, which will provide us with new insights from the conditions in the center of our sun to the evolution and lifetime of stars.”

Notre Dame is the lead institution of the DIANA project. Other participating institutions are Lawrence Berkeley National Laboratory, The Colorado School of Mines, Michigan State University, the University of North Carolina and Western Michigan University.