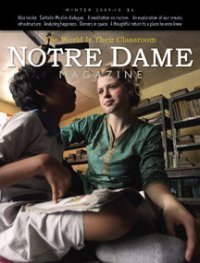 Praise is comely for the upright, as the Psalmist and anyone on the staff of Notre Dame Magazine will tell you.

The University of Notre Dame’s quarterly magazine received a surfeit of praise from a variety of quarters during the last year, and in expressing his satisfaction, its congenitally unassuming editor, Kerry Temple, came as near as he is capable to a boast.

“What’s really pleasing about the recognition is that it comes from different venues,” Temple said. “From our peers in higher education, from the world of Catholic publishing, and from those paying attention to quality writing and website development in contemporary America.”

The magazine was named the top “general interest” magazine of 2009 by the Catholic Press Association (CPA). The CPA judges cited Notre Dame Magazine’s “general excellence” and its “range of articles that go from nitty gritty personal news of alumni to national politics as it connects to religion and the university. The articles are well-written and well-reasoned and are contributed by people who exhibit strong knowledge of their subjects. The magazine is nicely laid out and color reproduction is bright and excellent. All in all, the magazine is classy, informative and smart while adhering to its mission.”

Notre Dame Magazine also won a Silver Medal “for overall excellence” from the Council for the Advancement and Support of Education (CASE), the largest international association of education institutions, in the 2009 CASE competition.

“The Signs of These Times,” an essay by Temple in a recent issue of Notre Dame Magazine was cited among the “Notable Essays of 2008” in Houghton Mifflin’s 2009 edition of “The Best American Essays.”

Temple seemed particularly pleased to note that more than half the magazine’s production costs are met by voluntary subscriptions. “The financial support and affirmation we get from our readers means we’re succeeding with them as well,” he said.