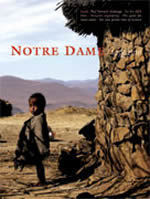 Notre Dame Magazine, the Universitys quarterly alumni publication, won three awards from the Council for the Advancement and Support of Education (CASE), including a gold medal for excellence, and seven honors from the Catholic Press Association (CPA).

The recognition is really nice,magazine editor Kerry Temple said.Affirmation is always appreciated, and this is a tribute, not only to the staff, but also to the writers, artists and photographers who contribute.The magazine really is the collaborative effort of creative people as well as our readers who support us so generously.

University photographer Matt Cashores autumn 2006 cover photo of a boy in aLesothovillage received one of only two CASE gold medals awarded from among 78 entries in the individual photographs category.

No Time for You,a spring 2006 article by Chicago freelance writer Andrew Santella about young people trying to balance career and personal relationships, won a CASE bronze medal in the best articles of the year category.

New York Times correspondent Anthony DePalma, who served as a visiting fellow in Notre Dames Kellogg Institute for International Studies during the 2003-04 academic year, received two CPA second-place awards forEarth Movers,an article he wrote for the summer 2006 issue of Notre Dame Magazine about effecting change in the world.The awards were presented in the best investigative writing or analysis and best feature article categories.

CASE is the largest international association of education institutions, serving more than 3,000 universities, colleges, schools and related organizations in 45 countries. It is the leading resource for professional development, information and standards in the fields of education, fund raising, communications and alumni relations.

The Catholic Press Association of theUnited StatesandCanadastrives to build and strengthen the value and worth of the Catholic press by facilitating the professional, economic and spiritual growth of its members.

Notre Dame Magazine has 150,000 subscribers and repeatedly has been honored as one of the outstanding publications in higher education.