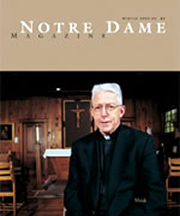 Two essays published in Notre Dame Magazine in 2003 have been honored in the 2004 volume “The Best American Essays,” published by Houghton Mifflin Company.

“When I Have Driven Far Enough,” by Notre Dame Magazine editor Kerry Temple, was named one of the “Notable Essays of 2003.” The essay, from the summer03 issue, describes a man in his middle years contemplating the crossroads of his life. A 1974 graduate of Notre Dame, Temple has been acclaimed as a premier American essayist on five previous occasions.

“When He Spoke,” by Mark Yates from the autumn 03 issue, also was named a “Notable Essay of 2003.” The piece compares Yatesexperiences at a Buddhist monastery in Japan with his fathers experiences as a park ranger.

Notre Dame Magazine also recently was honored as a finalist in Utne Magazines 2004 Utne Independent Press Awards for the quality of essays it publishes. The Utne awards have honored “excellence in publishing stories, images and ideas that matter” for the past 16 years. The publications selected as nominees and winners were chosen from the Utne library of more than 1,400 periodicals.