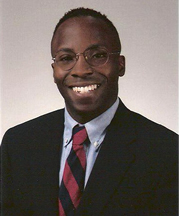 For Sean Seymore, being called an over-achiever is nothing new. The third-yearUniversityofNotre Dame LawSchool student has a consistent track record for going above and beyond the academic call of duty. In addition to his law degree, which he’ll complete next May, his curriculum vitae also contains three degrees in chemistry – a doctorate from Notre Dame, a master’s degree from Georgia Tech, and a bachelor’s degree from theUniversityofTennessee.

The degrees themselves, and the fact that he taught chemistry for two years before starting law school, do set Seymore apart from most of his fellow students. However, there is one other distinction that makes him truly remarkable – during his law school career, he already has had no fewer than four scholarly articles accepted for publication in legal journals.

The articles focus on such topics as intellectual property in higher education, transit inequity in urban centers, and federal funding for black colleges, and will appear in four separate publications – the Albany Law Journal of Science in Technology, the Richmond Journal of Law&Technology, the George Mason University Civil Rights Law Journal, and the Washington and Lee Journal of Civil Rights and Social Justice.

Seymore credits his accomplishments to his “personal drive and commitment to excellence,” and reflects on a lifelong history of hard work and dedication. The first member of any generation of his family to graduate from college, he attendedRichmondCommunityHigh School, a public institution inVirginiafor gifted and talented students, and was the first out-of-state Tennessee Scholar as an undergraduate. He currently is writing his autobiography and preparing to lead a symposium titled “Alternative Careers in Chemistry” at the American Chemical Society’s spring conference next year.

Although it might appear that Seymore is switching gears by now pursuing a law degree after an already accomplished career in chemistry (he also has published three scholarly articles in that field, with a fourth pending), he actually is combining two of his lifelong loves – chemistry and patent law. The two might seem like unusual bedfellows, but Seymore plans to blend the two, through a career in patent prosecution, in which he will assist inventors, academics and others to obtain patents for their advances in chemistry.

He has proven himself as a student and scholar, many times over, but Seymore says his graduation fromNotre DameLawSchoolwill likely mark the end of his time in the classroom.

“People keep telling me I should get an MBA, but I think this will be it,” he said. “Four degrees is enough, I think.”

Seymore will join the law firm of Foley Hoag LLP inBostonupon his graduation in May.