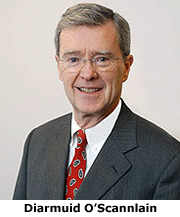 Justice Diarmuid OScannlain of the U.S. Court of Appeals for the 9 th Circuit will speak Friday (Oct. 6) at noon in the courtroom of the University of Notre Dame Law School.The event is free and open to the public

OScannlain was appointed by President Reagan and confirmed by the Senate as a justice to the 9 th Circuit in 1986.He previously served in the U.S. Army Reserve Judge Advocate Generals Corps from 1955 to 1978; as deputy state attorney general for the Oregon Department of Justice from 1968 to 1971; and as a consultant to the Office of the President-Elect of theUnited Statesfrom 1980 to 1981.He also has held other positions in private practice and public work.

OScannlain earned his bachelors degree fromSt. JohnsUniversity, a juris doctor fromHarvardUniversity, and a masters in law from theUniversityofVirginia.In 2002, he received an honorary degree from Notre Dame.

The Federalist Society for Law and Public Policy Studies is comprised of law students interested in the current state of the legal order, who believe that principles and legal rules strongly influence the direction of societal development, and in doing so, may secure or impede individual rights and liberties.The society is founded on the principles that the state exists to preserve freedom, that the separation of governmental powers is central to our Constitution, and that the province and duty of the judiciary is to say what the laws is, not what it should be.