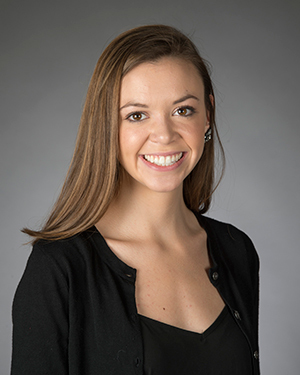 For the second time in three years, a University of Notre Dame student will be going on assignment with Pulitzer Prize-winning journalist Nick Kristof, The New York Times announced Saturday (Feb. 6). Junior Cassidy McDonald of Madison, Wisconsin, is this year’s winner of Kristof’s annual “Win A Trip with Nick” contest.

Her prize is traveling this summer with the Times columnist to a developing country to raise awareness about neglected global issues. During the trip, she will report for a blog and may appear in videos that will be published on The New York Times website. McDonald is majoring in marketing, with a minor in the John W. Gallivan Program in Journalism, Ethics and Democracy.

“I’m incredibly honored by the opportunity to travel alongside Mr. Kristof; his reporting is my favorite example of journalism as a force for good. He reports on the world’s most marginalized people, but his work doesn’t discourage — it inspires,” McDonald said. “Small as one person’s efforts may be, I hope I’ll be able to work with the same commitment to reporting in a way that cuts through the noise.”

In 2014, Notre Dame’s Nicole Sganga won the Kristof competition and traveled with him to Myanmar.

“Cassidy’s commitment to serious journalism and its values has been at the heart of her work since she became a student in the Gallivan Program during 2014,” said Robert Schmuhl, Walter H. Annenberg-Edmund P. Joyce Professor of American Studies and Journalism and director of the John W. Gallivan Program in Journalism, Ethics and Democracy. “Like Nicole Sganga before her, Cassidy understands that it’s essential to balance professional experience in news with classes that explain journalism’s role in a democracy. For both of them to win the Kristof contest is a tremendous tribute to them and also a vote of confidence in Notre Dame’s approach to journalism education.”

At Notre Dame, McDonald is managing editor of Scholastic, the University’s monthly student news magazine. In her role with Scholastic, McDonald manages 50 writers, edits articles and generates story ideas. She has written editorials and numerous stories for the magazine.

During the fall of 2015, McDonald worked as an intern for “60 Minutes” in Washington, D.C., where she created research reports on Russian military weapons, gun death statistics, nuclear capabilities of Middle Eastern countries and more. She also managed a shoot in West Virginia and worked to fact-check the show’s scripts.

Her multimedia experience also includes work during the summer of 2014 when she interned at NBC15 News in Madison and in 2013 at the Madison Police Department. At the affiliate, McDonald wrote broadcast copy and served as a multimedia journalist on her own video packages. At the police department, she worked as a social media intern producing, directing, filming and editing department promotional and training videos.

Her volunteer work includes several trips to a medical clinic in La Ceiba, Honduras, to administer audiology exams in Spanish to children and adults and assist with distribution of free hearing aids. Prior to each of her trips to Honduras, McDonald helped to acquire enough medical and various supply donations to fill a shipping container to aid the residents there.

Kristof and The New York Times created the annual contest in 2006 to give undergraduate and graduate students at American colleges and universities an opportunity to report and raise awareness about global issues such as poverty and solutions in the developing world. To date, he has taken seven students and two teachers on reporting trips. McDonald’s application video for the trip is available here: http://cassidymcdonald.com/win-a-trip-application-2016/.