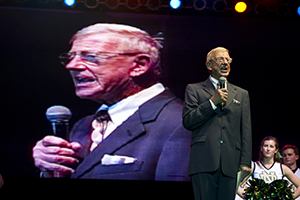 • Miami Beach officials estimated at least 20,000 fans attended the Notre Dame pep rally on South Beach on Saturday night (Jan. 5). Mike Golic, a former Irish football player and co-host of the ESPN Radio program “Mike & Mike in the Morning,” served as the emcee for the rally, and speakers include comedian Martin Short, the parent of two Notre Dame graduates and a member of the advisory council for the DeBartolo Performing Arts Center; former quarterback Joe Theismann; 1988 national champions Pat Terrell and Tony Rice; and Lou Holtz, head coach of the ’88 team.

“Alabama, I hope you’re listening, ’cause we’re comin’ for you,” said Theismann.

Holtz praised the University for showing that “we can be on top without compromising one thing academically, or our values.” He added: “As special as it was for other teams to play against Notre Dame, it was even better to play for Notre Dame.”

Rice joked that he’s “too old to play, but I’m so hyped up that I’m ready to go out there,” on Monday night.

• The Notre Dame leprechaun, senior Bryce Burton, transferred to the University after spending his first year at Indiana University. That puts him in good company. Notre Dame’s president and provost, Rev. John I. Jenkins, C.S.C., and Thomas G. Burish, respectively, both transferred into Notre Dame as sophomores.

• Everywhere you turn, souvenirs are available – in hotel lobbies, on street corners, in malls, along the beach and elsewhere. Notre Dame’s royalty revenue is up 32 percent over a year ago, though the officially licensed BCS merchandise does not factor into that equation.

• Two of the hardest working staff members here in Miami and for the last month have been Mary Anderson and Lauren Fox in special events. From arranging a variety of activities here, to transportation, event ticketing, meals, mementos and virtually everything else associated with the trip, they have worked nearly non-stop all day, nights and weekends since the Irish earned their place in the national championship game. In fact, they’ve even enlisted their spouses to help them this weekend at the Intercontinental Hotel.

• The Intercontinental has photo montages and video on screens inside and outside the hotel commemorating the 2012 Irish football team.

Visit photos.nd.edu to see images of Notre Dame in Miami.