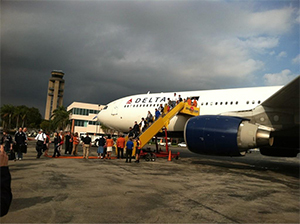 • Some 300 members of the official Notre Dame traveling party to the national championship football game between the Irish and Alabama departed South Bend for South Beach a little after noon Friday (Jan. 4).

The travel party dropped off luggage between 8:30 and 10 a.m. at the Joyce Center, then gathered on the fifth floor of the Notre Dame Stadium press box before leaving in stages for the airport on seven buses.

After an uneventful flight, their Delta A330 charter flight landed at 2:40 p.m. and received an “orange carpet” welcome from members of the host Orange Bowl committee.

Another cavalcade of buses transported the faculty, staff and administrators and their families to a variety of hotels in Fort Lauderdale and Miami.

Among those in the travel party were members of the President’s Leadership Council, including Vice Presidents Rev. William Lies, C.S.C., Robert McQuade, Nick Entrikin and Lou Nanni; College of Science Dean Gregory Crawford and Notre Dame Law School Dean Nell Newton; Tricia Bellia, professor of law and chair of the Faculty Board on Athletics, and her husband, A. J. Bellia, professor of law; President Emeritus Rev. Edward A. Malloy, C.S.C.; and a wide array of staff from development, the Alumni Association, University Communications, and athletics.

• The temperature in South Bend at departure was about 20. It was 79 upon arrival in South Beach.

• The Wall Street Journal’s coverage of the sports world is high in quality but low in quantity. That’s why the four full pages of coverage of the Irish-Alabama game in Friday’s paper was especially noteworthy. The main headline called this matchup “The Biggest Game Ever,” and the package included seven stories, including “Notre Dame’s Holy Line,” an examination of the University’s Catholic identity.

• Legendary former Notre Dame football coach Lou Holtz is featured in a commercial that will air during Monday night’s national championship game. Produced by Catholics Come Home Inc., the 30-second spot has aired during other bowl games this past week.