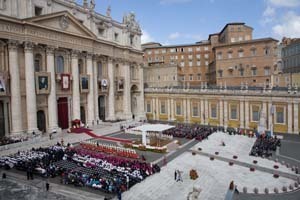 Vatican estimates put the crowd which thronged Saint Peter’s Square yesterday (Oct. 17) at 50,000. The pilgrims were in Rome for Pope Benedict XVI’s canonization of the six newest saints of the Catholic Church, one of whom, Saint André Bessette, is particularly dear to the University of Notre Dame.

Notre Dame’s president Rev. John I. Jenkins, C.S.C., led a delegation of University officials which arrived in Rome Sunday morning to attend the canonization and will remain in Rome until Wednesday to attend other celebrations honoring Saint André, the first member of the Congregation of Holy Cross, Notre Dame’s founding religious order, to be proclaimed a saint.

Also in attendance were some 30 Notre Dame participants who joined students, alumni, faculty and friends of the University in celebrating the canonization with a weekend of events organized by the University’s Center for Social Concerns, Nanovic Institute for European Studies, Rome Studies Program and Cushwa Center for the Study of American Catholicism. In addition to hearing a lecture by Kathleen Cummings of the Cushwa Center on “Canonization in the American Context,” they served and shared a dinner in the medicines center of Sant’Egidio and the Missioners of Charity hospice. 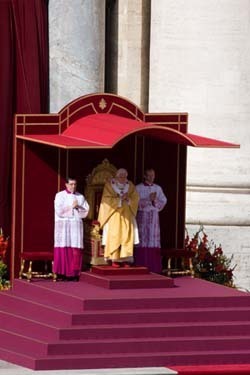 Saint André, who died in 1937, was born into a poor Quebecois family, orphaned at the age of 12, and drifted for years in Canada and New England as an unskilled worker. In poor health, physically diminuitive, and functionally illiterate, he was unenthusiastically accepted by the Holy Cross order in 1870 and assigned to the post of doorman at its College Notre Dame in Montreal. The kind welcome he provided for all visitors, particularly the most poor and vulnerable was noticed early on and eventually became legendary, as Pope Benedict said yesterday in his homily at the canonization Mass, Saint André “showed boundless charity and did everything possible to soothe the despair of those who confided in him. With little instruction, he nevertheless understood what was essential to his faith. For him, to believe meant to submit freely and lovingly to Divine Will. Everything existed through the mystery of Jesus, he lived the beatitude of the pure of heart…and thanks to this simplicity, he showed many God.” 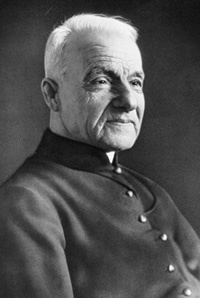 All three Sunday Masses in Notre Dame’s Basilica of the Sacred Heart honored Saint André with special hymns, readings and prayers taken from the liturgical texts for his Jan. 6 feast day.

According to Rev. Peter Rocca, C.S.C., rector of the Basilica, the University also will celebrate the Mass for the Feast of Saint André in every residence hall on Oct. 31, after the fall mid-term break. There also will be a night of prayer at Notre Dame’s Our Lady of Lourdes Grotto in honor of the newly canonized saint on Nov. 1.

“Brother André has become the first saint of the Congregation of Holy Cross, so it’s important that the University celebrate his canonization, and that our students in particular come to know who this holy man of a very humble heart was,” Father Rocca said.