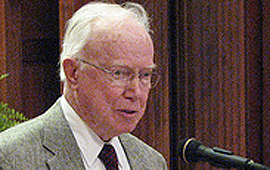 “This is unexpected and most gratifying,” Gleason said. “I have fond memories of the University of Dayton, both teachers and students. I appreciate this recognition from my alma mater.”

The foremost living historian of American Catholicism, Gleason, whose scholarship also includes American intellectual history and immigration and ethnic history, was graduated from the University of Dayton in 1951. He worked briefly for the U.S. Air Force and as an eighth grade teacher before coming to Notre Dame as a graduate student, earning master’s and doctoral degrees in history in 1955 and 1960, respectively.

A member of the Notre Dame faculty since 1959, Gleason chaired the Department of History from 1971 to 1974, wrote numerous articles and books including “Contending with Modernity: Catholic Higher Education in the 20th Century,” “The Conservative Reformers: German-American Catholics and the Social Order,” “Catholicism in America,” and “Keeping the Faith: Language and Ethnicity in 20th Century America.”

He retired in 1996, having received numerous awards for his teaching and scholarship, including honorary degrees from Loyola University in Chicago, the University of Dayton’s Marianist Award, and the Theodore M. Hesburgh, C.S.C. Award from the Association of Catholic Colleges and Universities. In 1999, he received an honorary degree from Marquette University and Notre Dame’s highest honor, the Laetare Medal.